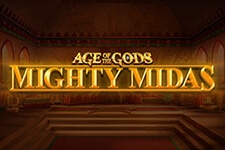 Age Of The Gods Mighty Midas

Open another chapter of the Playtech edition Age of the Gods and witness how Midas turns all your gains to gold.

Play Age Of The Gods Mighty Midas with Real Money

About Age Of The Gods Mighty Midas

A relaxing, yet quite rewarding gaming experience awaits you in Age of Gods: Mighty Midas, a Playtech release from December 2018. It boasts the unique Touch of Midas feature, Wild Substitutions and a bonus game with 5 different features.

Enter the golden city and enjoy its merits, for this game has a top payout set at a staggering 8,650x the bet. A 5-reel, 4-row layout offers 40 fixed paylines to wager up to $2,000 on, which makes the Playtech slot especially alluring for high-rollers.

Midas himself represents the highest paying symbol awarding 500 coins for 5 of a kind. Other rewarding symbols include some of the Greek deities that pay out from 150 to 400 coins when 5 matching icons appear on a payline. Grapes, Goblet, Apple, Rose and Chicken deliver from 75 to 125 coins if 5 of a kind land on a payline. Golden Wild replaces all other symbols bar Scatter when contributing to winning combinations.

The Midas Touch symbol appears on the reels 3, 4 and 5 and when it does, it will point to any icon on its left thus transforming all matching symbols into Wilds. The touch icon then drops letting another symbol to take its place. If Midas Touch points to Golden Wild it can increase its multiplier value up to 3x.

Scatter appearing on the reels 1 and 5 activate the Gem feature. Scatter on the reel 5 will spin to award 1 out of 5 features rich with a multitude of benefits. You can receive a cash prize, a 30x multiplier, a random icon can be chosen to become Wild or up to 65 Wilds could be placed on the reels during 5 free spins. In the end, the Midas Touch symbol can land double stacked to increase chances of wins.

Last but not least, the Power Jackpots can be activated on any spin, making a huge impact on your balance.

A theoretical Return to Player of 96.34% provides balanced gameplay.

"Lavish visuals and a musical score with a hint of mystic contribute to the overall gratifying experience the game delivers. The greatest advantage of this slot is most certainly the abundance and variance of bonus features along with four different progressive jackpots that could get triggered on any spin."

Play Age Of The Gods Mighty Midas for Real Here