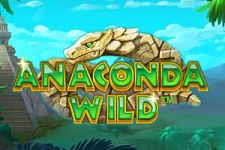 “Hidden riches of ancient Mayan civilization await it the deep jungles of Central America... Do you have what it takes to uncover them?”

The Conquistadors arrived in the Americas in the 16th century, driven by the stories of immense treasures just waiting to be found across the New World. However, many of them went back to Europe empty-handed, while the stories of the hidden riches continue to live to this day. Now, with Anaconda Gold, Playtech will take you on a quest to find and grab one of these forgotten fortunes of the Mayan Empire.

Anaconda Wild is a 6-reel, 4-row video slot with a total of 50 fixed paylines, that promises to take you to a thrilling adventure set deep in the jungles of Central America. Join the quest and see whether you have what it takes to find ancient Mayan treasures in this innovative yet simple release. Players are sure to benefit from the game's main feature. Unfortunately, this is the only one as well called the Stone Serpent feature. You'll see a snake moving around the reels and leaving Wild symbols in its path with re-spins awarded. This one can be very lucrative, as it has the potential to award payouts worth 2,000x the triggering bet!

Welcome to the lush Central American jungle, home of the Maya civilization. Before you embark on this perilous adventure, you'll need to choose a wager that will suit your playing style and budget. You don't want to end your quest, before having a chance to find the treasure. Wagering starts at $0.25, while the maximum bet can't exceed $2,500 per spin.

The Playtech release has nice visuals, with the reels set against an ancient temple, and populated by symbols such as coins, rings, daggers, goblets and treasure chests. You'll encounter a Mayan female warrior, who is a very generous icon, paying out 20 times the triggering bet for 5 or 6 on a payline.

Wild is the game's highest-paying symbol and, in addition to that, it has the power to substitute for all other icons as Anaconda Gold doesn't feature Scatter. Apart from giving you rewards going up to 40x your wager, Wild activates the game's only bonus feature when one Wild lands anywhere on the grid.

A snake will appear from the place where Wild landed and will start moving across the reels, leaving Wilds in its path. With each move, players receive a respin, which in turn leads to more Wilds on the reels. The feature will come to an end once the snake has reached its starting position.

This feature can prove to be very lucrative, as Wilds filling up the screen can lead to payouts worth a staggering 2,000x the bet! Anaconda Gold is a medium variance title, with an average return to player of 95.48%.

"Anaconda Wild is a nice looking game, with more than decent graphics and a very exciting Stone Serpent feature, which has the potential of awarding massive payouts. However, this feature is the only thing this game has to offer and it feels the developers could have added at least a Free Spins round. Don't blame yourself if the game becomes too boring too quickly."