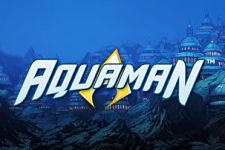 “Get ready to go deep beneath the ocean surface and join our superhero on an epic adventure you'll never forget!”

Playtech invites you to enter the mesmerizing world of Aquaman in this exciting video slot that will keep you seated for hours. Named after the main protagonist of this game, this release draws its inspiration from American comic books published by DC Comics, where this superhero first appeared in 1941. Since then, Aquaman has become more popular, with storylines depicting the weight of his role as king of Atlantis.

Aquaman is a 5-reel 3-row video slot with no traditional paylines. Instead, the game offers 243 ways to win and plenty of chances to win thanks to its thrilling features. This list includes two respins features and the Atlantic Free Games, where you can win unlimited spins and get Wild multipliers going up to 4x. Probably the most appealing part of this game is the fact it has four progressive jackpots on offer, with the biggest one having the potential to award life-changing sums.

Before you dive deep into this aquatic adventure, it's important to place the bet that will suit your playing style and budget. The game's coin denomination ranges from $0.01 to $20, while the betting starts as low as $0.25 and can go all the way up to $500 per spin.

You'll see the underwater kingdom of Atlantis in the background, while the symbols such as the low-paying playing cards, 3 different villains, Mera and Aquaman himself populating the reels. The superhero is the game's highest-paying symbol, with 5 of a kind across a payline giving players 20x the triggering wager. The trident symbol acts as Wild, substituting for all other icons bar Scatter.

In terms of features, this game has a lot to offer. The Trident Wild Respin feature is activated when the Aquaman icon lands fully on reel 2. Our superhero will throw his trident on the reels which will respin, while 3 symbols will turn into Wilds and stay locked on the reels until a winning combination is formed. When Mera fully lands on reel 4, the Ocean Rush Respins feature will be unlocked. She will randomly choose a symbol which will be locked while the reels respin. The two respin features can be combined, which can lead to even bigger prizes.

Players are sure to benefit from the Atlantis Free Games feature, triggered whenever 3 or more Scatters find their place on the reels, awarding players 8, 12, or 16 spins depending on the number of the symbols used to activate the round. Watch out for the Golden Aquaman symbols, which can replace villain symbols and further boost your wins.

Every winning combination containing Wild can be increased by up to 4x while landing a minimum of 2 additional Scatters will award more spins!

"Some players may be disappointed as the game is not based on the recently launched motion picture, but this doesn't mean Aquaman is not an exciting and entertaining slot. On the contrary, the game offers beautiful design, immersive gameplay and plenty of opportunities to win. With four progressive jackpots available, the game has the potential to change lives!"