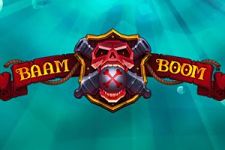 “Baam Boom is like playing Battleship, but on a whole new level... A one that can reward you with cash prizes!”

Have you ever played the Battleship board game? If your answer is yes, then you'll love the Playtech release that combines this popular game with a video slot, creating an action-packed title you'll definitely want to play.

Shoot your cannons and sink ships on up to five maps to win rewarding prizes while you're at it. Titled Baam Boom, this is a 5-reel 3-row video slot with 25 fixed paylines, playable from a mere $0.30 per spin. Punters will not only love the game's pirate theme but will also enjoy its features, such as the Treasure Chest where up to 30 spins can be grabbed. Be on a lookout for Cannonball Wilds, which can be used to fire at treasure maps and bring potentially lucrative prizes. You'll love the game's Bonus feature, where you'll fire 5 cannonball Wilds at a randomly chosen map, resulting in even more wins. So get ready for maritime mayhem with lots of fun.

Before you hit the Spin button, you'll need to place your bet. Doing that is pretty straightforward, with wagering starting as low as $0.30 and going all the way up to $300 per spin.

Visually, Baam Boom is a nice looking game, although it doesn't boast any top-notch animations. It does, however, feature a somewhat weird soundtrack, that definitely fails to match the theme, but you'll get used to it after a couple of spins. The reels are populated by various symbols, including playing card suits, beer mugs, barrels, guns, and cannons. The X symbol is the game's Wild, substituting for all other icons except for Scatter and helping players complete additional winning combinations. Wild will appear only during the main game.

The list of features starts with the Treasure Chest feature, which is triggered whenever 3 or more Scatters – which are represented by a skull – land on the reels. Depending on the number of Scatters used to activate the feature, players will get a payout worth 5, 50 or 100 times their stake, as well as 10, 20 or 30 free spins respectively. Pay special attention to Cannonball Wilds during this feature, as they are collected and can be very useful later.

Collected Cannonball Wilds can be fired at the map to find treasure rewards. There are 8 cash prizes on each map and you'll need to find at least 5 to unlock the next level map. With each new level – there are 5 of them – the prizes will get bigger and bigger. If you make all the way to the final treasure map, you're in for a payout worth 166 times your bet.

The Bonus feature is activated when you collect 5 Wilds in the main game. Once you do that, you'll get a randomly chosen map from the Treasure Chest feature as well as 5 Cannonball Wilds. Expect to get hefty prizes if Lady Luck smiles upon you.

Launched in September this year, Baam Boom is a medium variance game with an average return to player (RTP) of 96.35%.

"Kudos to everyone at Playtech for making such an extraordinary game that has the potential to keep you seated for hours. You'll definitely enjoy playing this one, no matter whether you like the whole pirate theme or not, as the prizes offered by the Treasure Chest feature and maps are so appealing. We suggest you check it out as soon as possible."