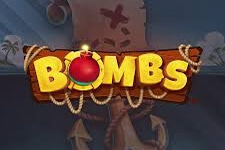 When it comes to pirates, it’s usually the guys with the bigger cannons that will win the day. But particularly crafty slot enthusiasts can make do with even unexploded bombs! As two rival ships duke it out over treasure, you have a chance to sneak in and take it for yourself.

Some games need a lot of time to win you over. Others present a novel concept that immediately resonates with you. For us, this Playtech release certainly met with the latter category! While the graphics weren’t the best we have ever seen, they were serviceable. What won us over was the fast-paced gameplay and numerous bonuses that could appear on every spin!

Bombs is a 5-reel, 7-row video slot with 20 fixed paylines. The theme takes us far-away, where two rival crews are competing for some sunken treasure. With the help of the cannonballs they keep firing, you could unearth the loot and take it for yourself! Each cannonball brings a different special feature, up to seven in total!

Players can adjust their total bet by pressing the minus and plus buttons on each side of the total bet. Your minimum stake is $0.20, while the maximum is $500 per spin.

The symbols are a mixed bag. There are some that perfectly suit the theme and some playing card icons that look quite generic. Symbols with unique artwork include treasure maps, golden coins, an anchor, and a pirate.

A brown chest with a large golden W is the Wild icon. Black bombs on the left and right side of the reels are the various bonuses that appear randomly. They are activated when a red bonus bomb appears on the reels, in the same row as the special feature bombs.

There are several bonuses that can be won using this method. These include:
• Cash Prize bombs – Grants a cash prize up to 10x your total stake.
• Spreading Wild bombs – Creates between five to ten Wilds in random positions on the playing field. Random Wilds cannot land on each other.
• Multiplier bombs – Applies a multiplier on the winning combination. The multiplier ranges between 2x to 10x. It also applies to wins creates by Cash Prize bombs.
• Detonating bombs – These bombs, when they appear, will blow up all other bombs currently on the screen. In doing so, they trigger all the associated special features at once.
• Free Spins bombs – Ten free spins are awarded to the gambler. During extra turns, there is a greater chance of more bombs appearing. Bombs carry over from the base game to free spins, and vice versa.
• Mystery bombs – These will randomly transform into another bomb when activated.

Bombs has a medium-high variance, with an RTP between 95.23% to 96.61%. Cross your fingers and hope you win as many multipliers and free spins as possible! You’ll need them to get the 4,000x jackpot.

"We’ll admit, the graphics weren’t our favourite part of this game. They’re not bad, but they’re a bit too zoomed out for our liking. The RTP does fluctuate a little bit, but it’s stable for the most part. You can win a jackpot up to 4,000x your total stake, but it will require some luck and a lot more grinding!"