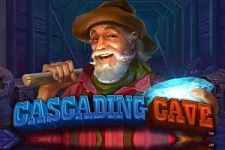 “Discover treasures buried deep underground, and scoop prizes going up to 10,000 your bet on each spin!”

One of the recently-launched games by Playtech promises to take players deep underground, mining for gems and precious ore, with axes, lanterns and miners making up the imagery of this exciting video slot. Don't be fooled by what that first seems like a complicated game, Cascading Cave brings plenty of fun and even more chances to dig up significant prizes.

Cascading Cave is a five-reel, three-row with a total of 20 paylines, featuring stunning visuals, plenty of special symbols and the collapsing reels system that can prove to be extremely lucrative, delivering several consecutive wins for players. The game boasts several unique and exciting features that can help punters as they dig for treasures. However, it seems that Playtech didn't include a Free Spins bonus round in the package, but collapsing reels and multiplier Wilds can make up for that.

Before the reels start playing, players will need to choose the wager suiting their playing style and budget. Cascading Cave is playable for $0.10, while the maximum wager can't exceed $500 per spin.

The reels are populated with brightly-coloured gemstones, along with other symbols to go along with the game's theme, including the miner who is the most rewarding symbol, awarding payouts worth up to 100 times the stake for 5 of a kind across a payline.

The diamond serves as the Wild symbol, which means it has the power to substitute for all other icons – bar Scatter – helping players complete additional winning combinations. Every time a winning combination is formed, the Collapsing Reels feature will be activated, removing all winning symbols from the grid, with new ones occupying the empty spaces. In practice, this can lead to consecutive wins.

The TNT is the Scatter symbol, with 2 or 3 of them needed on the reels to start the Diamond Drop feature, triggering up to 3 reels. Each of the triggered reels will see symbols disappear from them, with up to 3 Wilds dropping onto the reels. A number on each of the diamonds located above the reels will indicate how many multiplier Wilds can collapse. Up to 3 multiplier Wilds, whose size can range from 2x to 5x, can collapse when a winning combination is formed. The feature will come to an end when no wins are formed.

Cascading Cave is a medium variance game, with an average return to player (RTP) set at 95.83%.

"Cascading Cave is all about getting consecutive wins from the Collapsing Reels feature. The fact it lacks the Free Spins round may not sound appealing to some punters, but we guarantee other features make up for that with prizes they have on offer."