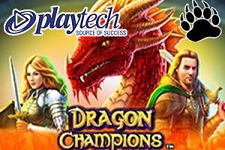 “Show you have what it takes to battle fearsome dragons and mythical heroes in this epic adventure and you'll be rewarded with riches beyond your imagination.”

Fantasy-themed games are becoming more and more popular, and Playtech intends to take advantage of this trend with their Dragon Champions video slot. The renowned developer is bringing epic heroes to the reels, accompanied by dragons to create an exciting video slot with plenty of opportunities to grab serious prizes.

Dragon Champions has 6 reels and 4 rows but doesn't offer traditional paylines. Instead, the game has 4,096 different ways to win and a number of potentially lucrative features. In the main game, players will benefit from the Dragonfire feature, where expanding symbols have the power to enhance wins. The Dragon Champions Free Games feature also has expanding symbols and with up to 100 spins up for grabs can result in huge cash prizes.

When it comes to wagering options, the game's coin denomination ranges from $0.01 to $2, while the bet itself can be anywhere between $0.40 and $80 per spin. Dragon Champions is playable across a wide variety of devices, including PCs, laptops, iOS, and Android.

Boasting nice visuals, the game brings mythical dragons and valiant heroes to the reels, with other symbols including playing card suits as well. The slot's highest-paying icon is the red dragon, which will award you a neat payout worth 10 times the stake for all 6 of a kind on a payline. The Dragon Champions logo serves as Wild, replacing all other game symbols except for Scatter.

The first feature we're going to mention is the Dragonfire feature, which is triggered randomly during the Main Game. Once it's on, any symbol (apart from the Wild or Scatter) that lands with blue Dragonfire can catch on fire and expand in all 4 directions and improving the existing winning combinations or creating new ones.

The good news is this feature can be activated in the Dragon Champions Free Games as well. The game's Free Spins round is activated whenever 3 or more Scatters land anywhere on the reels, awarding from 8 spins for only 3 Scatter, up to staggering 100 spins for 6 of them.

While the Free Spins feature is active, the Dragonfire feature will only apply to top-paying dragon icons, expanding them in up to 4 directions. Landing a minimum of 2 Scatters will award additional spins, whose number is not limited.

Dragon Champions is a high variance game, so don't expect to see big wins often, but when they come, they will definitely be worth waiting for. The slot's average return to player is set at 95.12%.

"Dragon Champions is a nice looking game and its high volatility makes it even more appealing, especially to high rollers. The Dragon Champions Free Games feature can prove to be extremely lucrative as it can expand the top-value dragon symbols and award staggering wins. Be prepared to wait for more substantial wins, and take it from us, it will be worth waiting for."