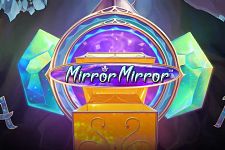 “Enter the magic world of fairytales where handsome rewards of up to 182,200 coins await those lucky enough.”

NetEnt invites you to a magical and wonderful journey in the latest instalment of Fairytale Legends series. Titled Mirror Mirror, the 5-reel 3-row video slot offering 243 different ways to win draws its inspiration from the famous story of Snow White, first published by the Brothers Grimm more than two centuries ago and still popular among to this day.

Available across all platforms, the game launched back in July, comes rich in features which promises a lot of excitement and a rewarding playing experience. There is a total of 7 special features, while 3 of them get activated randomly during the Main Game. Probably the most appealing feature is the Free Spins round, where not only 10 spins are up for grabs, but also the chance to trigger the Mirror Re-Spin feature after each spin and win staggering payouts going up to 1,882.5x the triggering stake! Enough said, let’s start playing.

Before you embark on this enchanting voyage, you’ll need to choose a stake that suits your preferences and budget. The game’s coin value ranges from $0.01 to $1, while the wagering starts as low as $0.10 and goes all the way up to $100 per spin. We believe all types of players will be able to find the right bet.

When it comes to the list of symbols featured in this fairytale-themed slot, it includes sparkly low-value playing cards, lanterns, gemstones, princesses, queens and the Fairytale Legends logo, which is also the highest-paying symbols awarding 15x the triggering bet when five of a kind find their place on a payline.

You may also encounter the mirror symbol, which can only appear on the centre reel during the main game and whenever it does, it will activate the Mirror Re-Spin feature. It will then turn into either the princess or queen symbol, and the chosen icon will remain locked in its place during the respin.

In addition to this, there are two more randomly triggered main game features. The Fairy Magic Spin feature will see a random cluster of up to 7 symbols appearing on the grid for 1 spin, while the Fairy Surprise feature will transform lower-value symbols into one randomly chosen symbol, which will remain in place until a winning combination is formed.

The other 3 bonus features are triggered when three bonus symbols land on reel 1, 3 and 5 at the same time, but can also be accessed after a non-winning spin during the Main Game.

These features are as follows:

Free Spins feature – you’ll start with 10 spins, while 1 or more mirror symbols finding its place on the reels while this round is active will activate the Mirror Re-Spin feature.

This is a low to medium variance game, with an average return to player (RTP) of 96.48%

"The third instalment of the Fairytale Legends features a familiar story in a visually stunning and challenging video slot, filled with opportunities to grab rewarding prizes. NetEnt has really done a great job with this release which will captivate you with its looks while keeping you seated for hours. Be sure not to miss it!"