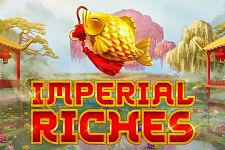 “Stunning looks, entertaining gameplay and 5 jackpots on offer... what more would you want?”

NetEnt's Imperial Riches boast an Oriental theme, with beautifully-designed gardens, ponds and other related imagery. Swedish developer of online casino content is known for its quality games and you'll realize why as soon as the reels start spinning.

Imperial Riches features a standard 5-reel, 3-row layout with 15 paylines available. Although this is not a high variance game, the slot still has handsome prizes on offer, as it boasts a number of exciting features, as well as bigger progressive jackpots. The list of these features includes the Lantern Scatter, Avalanche, Gong Wild, the Free Spin round and the Lucky Pond bonus. NetEnt opted for a familiar theme but made it sure it didn't lack excitement. Definitely a good deal for players!

When it comes to wagering, the game is playable on all devices from $0.15, while the maximum stake can't exceed $30 per spin.

The design of the symbols match the theme, so apart from the playing card symbols, you'll encounter bamboo plants, gold cymbals, gold ingots and golden fish. The latter is the highest-paying regular symbols, awarding a payout worth 100x the wager for 5 across a payline. The gong serves as Wild symbol, appearing only on the three middle reels and substituting for all other icons – except Scatter.

Imperial Riches feature the Avalanche game mechanics: when a winning combination is formed, the symbols will disappear from the grid, with the new ones falling into empty spaces. This can result in new combinations being formed, which will repeat the entire process.

Watch out for the Lantern Scatter, as 3 of them activate the Free Falls feature with 10 spins. Unlock the feature with 4 or 5 Scatters and you'll get 15 and 20 spins respectively. Win during this feature and the Avalanche will be triggered resulting in additional wins, while a symbol which is a part of a win gets collected as a jewel. Collect enough jewels and you'll be able to trigger the Lucky Pond Bonus Game.

Imperial Riches is a low variance title, with an average Return to Player set 96.88%.

"Imperial Riches is a beautifully-designed game, although the fact it offers low variance will not sound so appealing to some players. The Free Falls and Avalanche can bring neat payouts, but only the progressive jackpots can award hefty prizes."

“The Wild West awaits in this action-packed adventure brought to you by Playtech. Show your skills and claim prizes of up to 10,000 times the bet...”