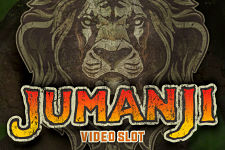 “When we heard that NetEnt made a licensing deal with Sony to produce slots for some of its movies, we were hopeful that Jumanji would eventually find itself on that list. And now, the 1995 classic comes back to life, first with a sequel movie, and now with a NetEnt title.”

We have to admit, we weren’t really the target audience for this movie. We ended up seeing it much later on TV and while it was a good show, the idea of it never really stuck with us. A possessed board game sounds equal parts thrilling and terrifying, but would we have expected to see its revival? Not in particular. We are glad that it happened, though. The new movie got decent scores from both critics and the audience, and by extent, we’ve also gotten our hands on a new NetEnt title.

Launched in June 2018, Jumanji offers a 3-4-5-4-3 playing field with 36 fixed paylines. It also offers a whole lot of bonuses, double or triple what you might find in other titles. You have four random features occurring during normal gameplay and on top of that, you have another four bonuses that you could win after collecting three or more Scatters. It’s a feature extravaganza.

While Jumanji itself wasn’t a cautionary tale, there’s a fair amount that you could learn from it. One of those things is to not touch something that isn’t yours. A somewhat anti-gambling sentiment as we’re always hunting the rush of a big win, but remember not to overspend on that quest. The coin denomination goes from $0.01 to $2.00, while the wager itself goes from $0.10 up to $200, which provides a wide variety of options to both casual players to ultimate high rollers who can stomach spending $200 per spin.

Among the list of game icons, you will find the pelican, the crocodile, the rhino and the lion, all four animal characters that took part in the movie and on the Jumanji board, and, by extent, looking positively menacing. There are also playing card symbols. Wild is that word itself overlaid on top of a rich background, while Scatter is the Jumanji box which fits given the feature it unlocks.

At any given point, one of four different features can unlock randomly during normal gameplay. Sticky Wilds will make all parts of a winning combination stick to the reels, while the rest re-spin, allowing you to hit a potentially bigger win. Monsoon Wilds will fill one or two reels entirely with Wilds. Monkey Mayhem shuffles existing symbols randomly to guarantee a winning combination. Finally, Wild Stampede will have a herd of rhinos rush across the reel, turning between four to nine symbols Wild.

Collecting three or more Scatters activates the bonus Board Game. You can take a pick between four different tokens, though they are all cosmetic. You get 6, 7 or 8 dice rolls for three, four or five Scatters, respectively. During these spins, you can win a cash prize ranging between 2x to 30x bet, an extra dice roll, which is self-explanatory, free spins which awards 6 free games played out immediately before returning to the board game and a Mystery feature that can reward any of the other three bonuses.

"A feature heavy game worth of the Jumanji title. We have to admit, NetEnt really knocked it out of the park here. The visuals and sound design were superb, the gameplay is intoxicating with so many features just waiting to be uncovered and the only slight downside to it for us were the pays. You owe it to yourself to try this game out."