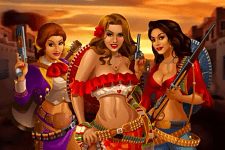 "The Wild West is not the place for the faint-hearted. Microgaming will take you to this lawless land, where rules are written in gunpowder. So, take your chances and you may win big."

Men, men, men. That's all you can hear when talking about the Wild West and the gun-wielding outlaws that once ruled the vast areas west of the Mississippi River. Well, it's about time you meet the sexy side of the American frontier in this Microgaming title which hit the market back in 2015.

This is a five-reel three-row video slot with 25 paylines starring the 'pistoleras' who are as beautiful and stunning as they are dangerous. The Mexican dressed blonde will knock you off your feet, blink and you'll miss our pistol wielding brunette, while the raven-haired beauty is definitely to die for. You don't need to rob a coach to fill your pockets with money, because there is a lot of bonus games, including Scattered Coaches, Free Spins, Saloon Bonus and Pistoleras Wilds to help you achieve that. Can you draw fast enough?

The West has its rules, and one of them is to place your wager before hitting the Spin button. The coin denomination ranges from $0.01 to $1, with the wagering starting as low as $0.25 and going all the way up to $250 per spin, offering multiple betting options that will suit any playing style and budget.

At least three symbols featuring playing cards landing on the reels will result in a payout, although it won't be so generous. Again, it's the three pistoleras you should be on a lookout for since one of the girls can reward you with a payout worth up to 10x your wager for five of a kind on the grid.

As usual, the Wild symbol will replace any other symbol on the reels bar Scatter. However, there's a twist to it: when substituting, a Wild will triple any subsequent win!

There are two types of Scatters and each of them triggers a different feature. A minimum of three Free Spins Scatter will trigger the feature of the same name, awarding 15, 20 or 25 spins depending on their number on the reels. This feature can prove to be very lucrative since all wins are subject to a 3x multiplier. And that's not all - retrigger the feature and you'll get top-value symbols stacked on all reels.

Three Money Bag Scatters on reels 2, 3 and 4 trigger the Saloon Bonus feature, where your gun-wielding skills will be tested. Choose from 12 targets, find three matching pistoleras or make the most out of the hidden Wilds to get multiple matches and plenty of cash.

"Wild West has never looked so appealing. With exciting gameplay, neat features, lucrative prizes on offer and hot bandits on screen, Pistoleras is one of those titles that will keep you seated for hours. The game has been around for some time, so it's definitely the right time to give it a try."