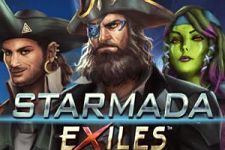 “The pirates of old meet the space age. It’s a combination that sounds ridiculous. It shouldn’t work. And yet, through some unexplained natural phenomenon, it does! Playtech has clearly struck gold with this slot, both in theme and gameplay."

Not all slots have an engaging theme. While we always appreciate worlds bathed in details and story hints, we don’t insist on it. But when games do pull it off, it helps set them apart from everyone else. And with just its title and symbol design, this Playtech release does it masterfully. Exiled from their homes, these people have turned to piracy for loot and revenge against their former fatherland!

Starmada Exodus is played on a 5-reel, 3-row board with 25 fixed paylines. The graphics look quite cool, especially the exile icons. With its medium volatility, gameplay is fairly balanced between frequent wins and huge jackpots. This also means you’ll see plenty of bonus activations! There are two available: the Plunder special feature and Free Spins with upgraded exile symbols.

Players can change their total bet directly by pressing the minus and plus buttons directly from the user interface. Your minimum stake is $0.25 while your maximum wager is $2,500 your total bet!

Available icons include the robot pirate, male pirate, female alien pirate, and the bearded captain as high paying symbols! There are also less valuable icons: treasure chests, mugs, compasses, spyglasses and blunderbusses. All the symbols are both futuristic and ancient at the same time, which gives this slot its charm.

A golden light is Wild, while a digital globe is the Scatter icon.

To win, collect three or more identical symbols in adjacent positions, starting with the leftmost reel. All wins must follow one of 25 active paylines or else they will not count.

The Plunder bonus activates when you collect two Scatters on the first and third reel. Select one of the Scatters to upgrade an exile icon into Wild or to win a cash prize. These Wilds are stored on the side of the reels until later. And when’s later, you might ask?

When free spins are activated, that’s when! You can do this by collecting three Scatters on the first, third and fifth reel. Alternatively, if you’ve already upgraded all Wilds, the next Wild upgrade will trigger the bonus. Either way, you get ten free spins! If you haven’t transformed any Exile symbols into Wilds, you can do so by collecting three rubies. Rubies only appear on the fifth reel during free spins.

The game has a medium variance and an RTP of 96.18%. The maximum jackpot you can win is worth 1,500x your total stake.

"We were pleasantly surprised by Starmada Exiles. The theme left the biggest impact, as it somehow blends old pirates and the sci-fi space travel! But the medium volatility also keeps gameplay engaging, while the 1,500x jackpot will leave many satisfied."