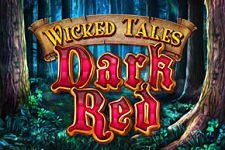 “Microgaming brings us a darker and sexier look to the same old story about the Red Riding Hood. With grandma long since gone and our former heroine having cursed the proud hunter into a feral beast, can you survive the dangers and get away with your life and numerous plundered riches?”

There’s not a child in the world that has not heard the familiar story of the Little Red Riding Hood as they were growing up. This time around, it’s Dark Red, and the game twisted all that we’ve known about the characters. The hunter is the victim of a curse that turns him into a wolf, Red Riding Hood is now an evil sorceress in a skimpy dress and the full moon brings out the dangerous beasts out to hunt intruders.

Wicked Tales: Dark Red is a 5-reel video slot with 25 paylines and a system in which parts of the reels expand and spins together. Available across all platforms, the game allows players to make use of the expanded, wandering reel to form jumbo blocks, as well as standard features like free spins and a point-and-click bonus game, all of which is activated by collecting three or more Scatter symbols. Which bonus you will win? That is determined by a spinning wheel and your own luck.

Before you venture into the lair of the witch, make sure you’ve prepared your wager accordingly. You can adjust your coin denomination from $0.01 up to $1 per spin, with the lowest bet being $0.25 and the highest at $200 per spin.

On the reels, gamblers can find lower paying symbols which use generic, playing card icons like J, Q, K and , as well as some unique artwork ones like candles and a coin purse. The other four symbols all have their own artwork as well and pay a lot more compared to the other six. You have a locket with a picture of grandma and Dark Red, a transformed feral wolf, the hunter before he was transformed and the sexy Dark Red herself clad in some revealing clothes. She’s also the highest paying symbol in the game, paying out 20x for a five-of-a-kind win.

The slot’s logo is used as Wild. It can replace any symbol except for Scatter.

The full moon is the game’s Scatter. Collecting three will activate the Wolf’s Wheel bonus, during which the wheel will spin until a feature is activated. The wheel has a chance to stop on a feature or on a cash prize and you can keep drawing cash prizes over and over until it finally lands on a feature.

The first of these bonuses you can activate is the Forest of Fortunes, which is the point-and-click bonus. You open travel bags, finding cash prizes, axes, or wolves within them. Every time you get a new cash prize, the multiplier goes up, making it more valuable the longer you last. If you draw an axe, it will temporarily protect you from the wolf for a single turn. And if you draw a wolf and don’t have an axe ready, the feature ends early.

Free spins are chosen when the wheel falls on one of the four higher paying icons. That icon will purge the other three from the reels, which rewards nine free spins with only one higher paying symbol available for the duration of the extra turns.

This is a medium variance game, offering an average RTP of 96.1%.

"While we weren’t thrilled with the theme, that’s more due to the fact that the story of Little Red Riding Hood doesn’t really lend itself to such a grim sequel. Still, judging by the Wicked Tales prefix, we’re willing to bet Microgaming will make more dark fairy tale stories in the future. We’re quite eager to see what they will do with them."