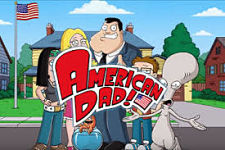 “Welcome to Langley Falls, the home of the Smits. Embark on an adventure with your favourite animated characters and enjoy in everything they have to offer.”

Slot adaptations of famous movies or cartoons are quite common and the latest title to crossover is an American animated adult sitcom, created by Seth MacFarlane, Mike Barker and Matt Weitzman.

This 2017 Playtech release, based on a series which has been on-air since 2005, will take you to Langley Falls, Virginia, the home of the Smith family, where you’ll see lots of familiar faces.

Stan is the man of the house, Francine is his charming wife, their daughter Hayley is a rebellious college student, while teen Steve is their dorky son. In the game, you’ll find all of them, as well as the family’s weird goldfish, Klaus and Roger the Alien.

Stan is a CIA agent and a Republican, and his patriotism is clear when you start the game, because the scenery features the stripes from the United States flag. The game look is cartoonish, which matches the entire theme.

There is a possibility you won’t get all the references if you have never seen an episode of American Dad, but don’t let that discourage you from playing it, since the game offers many bonus features.

American Dad! is a five-reel video slot with 40 fixed paylines. That means you won’t be able to choose on the number of active paylines, but you’ll still have the opportunity to choose the coin value.

The show’s characters are top-value symbols, while Roger the Alien is the Wild, substituting for all other symbols on the reels, except the game’s most original symbol - the Schmooblydong Wheel.

The Schmooblydong Wheel can appear only on reel 1, 3 and 5 and depending on where it lands, it will either trigger the game’s bonus features or it will award you with free spins.

On reel 1, the symbol will determine which character's feature will be played. Reel 3 will select one of the available power-ups for each feature. Reel 5 awards the number of Free Games, which can go up to 25.

These power-ups include the Stacking Stan, where additional stack of Stan symbols are added to the reel strips below each existing symbol, the Roger’s Random Wilds, the Francine’s Holy Grail, Hayley's Progressive Multiplier and the Wheels and the Legman.

"You don’t have to be a fan of a show to enjoy a video slot based on it. Heck, it won’t bother you if even if you haven’t seen a single episode. American Dad brings so much entertainment and features that will keep you seated for hours."