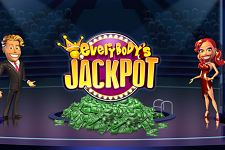 “Welcome to television, where everybody will have their 15 minutes of fame. But, while you’re at it, win payouts and grab some serious cash.”

Have you ever fantasized about being on a popular TV game show? If you have, than this Playtech’s title will be your cup of tea, since it brings the glamour of the popular television shows, in a unique and thrilling combination.

Everything is here to make you feel like you’re in a TV studio - the scenery, the hosts and even the reels are framed by a giant screen, with a smiling hostess standing next to it.

Those who appreciate a good background story will be somewhat disappointed, since the game doesn’t provide any. But that’s TV for you - use your 15 minutes of fame wisely.

Expect a lot of excitement, since this 2017 release offers plenty of it, and prepare to win big. The game has a progressive jackpot in hand, and if you’re lucky enough, you’ll walk out of the studio with your pockets full of it.

Everybody’s Jackpot is a three-reel, three-row video slot with 8 fixed paylines. The layout is not an everyday one, but apart from it, the other features are pretty much what you’ll encounter in the majority of titles.

As usual, the Wild substitutes for all other symbols, except the Scatter, but it can appear only during the Free Games.

The game logo is the Scatter, and landing at least three of them on the reels will trigger the Free Games, giving you 12 free spins. During the Free Games, the Wild is added to the centre reel and may appear in the middle position. Bearing in mind the game’s layout, a Wild in the middle can be worthwhile.

Landing 3 or more Scatters during the Free Games will retrigger the feature and there’s no restriction on the number of times you can do that.

As mentioned earlier, the game features a progressive jackpot, which a paying spin can randomly activate.

"Definitely a title worth checking out. It is definitely a unique one, offering the look and feel of a modern television show, which will give you a one-of-a-kind gameplay with lots of action and entertainment."