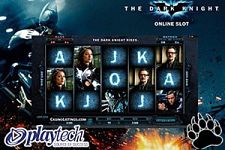 “Fight crime in Gotham City and grab lucrative prizes while you’re at it. What are you waiting for?”

About The Dark Knight

He is the hero Gotham deserves, but not the one it needs right now. He can take everything because he's not a hero. He's a silent guardian, a watchful protector, the Dark Knight! Playtech has been into comic books recently and the list of games based on acclaimed DC Comics is the best proof of it. It also includes a release that takes players to crime-ridden Gotham City, home of millionaire Bruce Wayne also known as Batman.

This 6-reel 4-row video slot with 50 paylines is based on Christopher Nolan’s 2008 movie of the same title, the second part of his The Dark Knight Trilogy. Paying both ways, The Dark Knight offers the Batman and Joker Respins features, as well as 3 free spins rounds and 4 progressive jackpots that can be won at random. A truly captivating playing experience with amazing visuals and sound effects!

The game can be played from $0.20 to $15 per spin on a wide variety of devices, with symbols on the reels including playing cards as low-value icons (A, K and Q), as well as some of the movie’s characters. You’ll encounter Jim Gordon, Two-Face, Rachel Dawes and eccentric millionaire Bruce Wayne, as well as Batman and The Joker.

Batman and The Joker are also very generous when it comes to payouts. Six Jokers will give a payout worth 35x the stake while the Gotham’s superhero pays a neat 75x the bet for six of a kind on a payline.

Batman and The Joker can appear stacked on the reels. Batman appears stacked on the reel 1 triggering the Batman Respins feature and locking all Batman and Wild symbols in their positions along with a coin toss. If the Batman side of the coin lands, the reels will respin, with new symbols locking and a new coin toss, while the Joker side ends the round. There are up to 8 spins available during this feature.

Both these Free Games will offer players 7 free spins with Batman becoming Wild and locking during The Dark Knight Free Games, while large Joker symbols have the potential to award neat wins.

If this doesn’t sound appealing enough, there are also four progressive jackpots. They are triggered at random while entering the Jackpot Game guarantees a win!

"This is an excellent Playtech release with top-notch graphics and the thrilling gameplay enhanced with a plethora of exciting and potentially lucrative features. Respins in the main game lock Wilds and large symbols can make the whole experience worthwhile. No matter whether you like the theme or not, this is a title you wouldn’t want to miss."