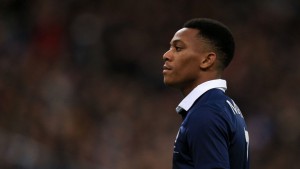 France and Manchester United forward Anthony Martial was given just 10 minutes to change the game in their Euro 2016 final defeat to Portugal at the Stade de France on Sunday evening, and unsurprisingly struggled to make an impact.

He’s played just 69 minutes of football in the tournament this summer despite possessing a skill set that could have been game-changing against Portugal among other games, so why hasn’t he featured more for France?

Competition for places in the France squad

Anthony Martial primarily operates as an inside forward on the left flank, cutting inside on his stronger right foot or taking the ball to the byline to get a cross in. Unfortunately for him, he’s found stiff competition in the France squad due to Dimitri Payet and Kingsley Coman. Payet has been a regular in the side through the tournament, cutting inside from the left, and when he’s been brought off it’s Coman replacing him.

Martial has been next in the pecking order but hasn’t been utilised. Deschamps left out a number of players in the 23-man squad, but Martial’s lack of game time is one that is sure to be questioned. Capable of playing as a centre-forward, Martial would have been a good option in place of Olivier Giroud but was instead playing second fiddle to Andre-Pierre Gignac.

Allegations of sulking and poor attitude to being dropped

After a miserable performance in France’s 1-0 win over Albania, Martial is alleged to have responded badly to being hauled off at half-time of the group game. His mood in the training camp is said to have not improved which is why he failed to make an appearance in the latter stages until Sunday’s final.

Following the Albania clash, which was France’s second group game in the tournament, Martial was an unused substitute in the following four matches. He remained on the bench in their final group game against Switzerland, the last-16 clash against the Republic of Ireland, the quarter-finals clash against Iceland and the semi-final outing versus Germany.

French football journalist Julien Laurens recently revealed Martial’s response to being brought off in the Albania game is what has led to him being underused. Laurens suggested Antoine Griezmann’s positive attitude to being dropped earlier in the Euros led to his recall to the first-team where he was a star for Les Blues. Martial, by comparison, was marginalised and punished by France manager Didier Deschamps for responding in opposite fashion to Griezmann.