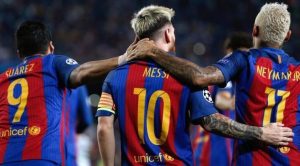 Spanish champions Barcelona kicked off the new campaign on a high, winning all seven games including the two-legged Supercopa de Espana tie against Sevilla.

Some of their wins were particularly impressive, like 6-2 trouncing of Real Betis, or the memorable 7-0 UEFA Champions League triumph over Celtic which has just made the odds of 3/1 on Barca to win the Europe’s elite competition this season even more plausible and reasonable.

Luis Enrique’s side continued their dominant style against Leganes at the weekend, inflicting a huge 5-1 blow to the lowly opposition.

In a statement of intent, the Catalans have once again demonstrated their inexhaustible desire to win, to be the best. With plenty of people wondering about what is the main ingredient which keeps the team going with such a force, one thing stands particularly obvious – the team spirit.

It was the day of all smiles once again with MSN all on the scoresheet to compound the comprehensive win in Saturday’s early kick-off.

Having learned an important lesson with that 2-1 loss to lowly Alaves, the Catalans went full force against Leganes from the off, making the break after only 15 minutes inside the game.

Rest of the clash was not exactly the game of cat and mouse as many would have hoped for, since Leganes put in a defiant performance that annoyed Barcelona players at times, but it was exactly the strong response from the rivaling team that exerted the full strength of Barcelona’s team spirit, rooted much deeper than smiling goal celebrations.

Brazilian Neymar is the best example.

Having launched his music career last week, on the back of revelation that he had an insane offer from Paris Saint-Germain, Brazilian international Neymar headed into the Saturday’s match feeling anxious and not fully concentrated.

As his team were cruising to victory with a 4-0 result in hand, Neymar succumbed to pressure and started provoking the Leganes players with his tricks and dribbles, which angered the home fans and even the former Barcelona star Michael Laudrup who was highly critical of his on-pitch behaviour.

Neymar’s anxiety was highlighted through rough treatment he himself was given by Leganes players. As if they went to poke him intentionally, Neymar was kicked several times in a familiar pattern that was seen so many times before.

Provoked to make a reaction, Neymar used his talent and technical quality to incite the opposing players, although he did appear to lose his temper in one occasion which was wisely put to bet by his friend and teammate from both club and country Rafinha.

The Brazilian was first one to notice that Neymar needed to be calmed down after getting a yellow card. He went to cool his friend, but Neymar was too angry that he ended up shoving Rafinha away. A scrap without consequences might have appeared ugly to an inexperienced eye, but it was just another confirmation of Barcelona’s wonderful team spirit.

The Catalan team is compounded of players that take care of each other, enjoying a close relationship which is most obvious during goal celebrations.

Honest smiles that reveal the innocent football desire, that playful flair you can now find only with young kids is perhaps the main ingredient of Barcelona’s football success.

Aforementioned Neymar and Leo Messi have been the best example of the bond that connects Barcelona players, making them even better than they truly are.

Their understanding on the field in uncanny, but Messi and Neymar’s relationship goes further beyond the pitch and dates all the way back to 2013 when the Brazilian first arrived to Barcelona. He was immediately accepted as one of their own, which is the case with all other newcomers for that matter.

Neymar’s cheerful nature helped the Brazilian fit in, but it was his footballing qualities that have most recently drawn comparisons to Messi’s relationship with great Ronaldinho a decade earlier. Messi had forged a special bond on both professional and personal level with the great Brazilian, and his relationship with Neymar is just a reflection of that successful partnership.

The way they work together on pitch and the way they celebrate their goals is just a validation of the effects that infectious team spirit has on the team’s performances.

Numbers are there to confirm it as well, the MSN trio has scored 10 goals in 5 days of the new season.

Not to undermine the relationship Leo Messi has with the second member of the infamous trio Luis Suarez, here is the fact that Argentine and Uruguay international’s 11 goal-creating actions between them since last season is the most common combo in La Liga.

The three players are epitomizing Barcelona’s team spirit which is rarely found in any other professional football club worldwide.