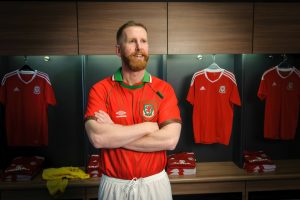 After waiting 58 years to see their nation represented at a major international tournament, the Welsh fans arrived in France for EURO 2016 optimistic and excited about their chances. After a tense group stage, Chris Coleman’s team captured the imagination as they reached the semi-finals.

As his nation prepares to resume their qualifying campaign for the 2018 World Cup in March, BBC Wales commentator, Norwich City legend and former Wales striker, Iwan Roberts, reflects on how the Welsh dragon set Europe alight at EURO 2016.

Did you feel confident going into the tournament?

There’s a lot been said about friendlies, whether they are a waste of time, what you get out of them. There are so many changes that the flow of the game goes, especially in the second half. We only had one friendly before going out to France for one reason or another. That was in Sweden and we were shocking. We lost 3-0 just before flying out to France, but maybe it was a good thing for us. It gave us a kick up the backside and was a wakeup call for everyone. Once we got it out of our system we went from strength to strength.

How did the Welsh team achieve what they did at EURO 2016?

The success that got the team to France was built on the base of a solid defensive unit. We had a really good qualifying campaign where we were strong defensively. In those 10 games, we only conceded four goals and kept seven clean sheets.

We also had a magnificent team spirit and a togetherness that you rarely see in international football. On the club scene, I think most clubs will say that team spirit is good and that everybody gets on, but I’ve never seen it as strong as it was with the Welsh squad in the games leading up to France and in the tournament itself.

With such a young squad, what lessons can the players take from the tournament?

I think we will only benefit from the experience of being out there for five weeks as a squad. These players haven’t had that so they will only become better from that experience. But the biggest thing to take away was developing that never say die attitude.

People go on about all the goals that Wales scored, and the Belgium game where we were magnificent, but I remember the first game. In the first five minutes against Slovakia, Marek Hamsik got through and should have scored really. I don’t know how Ben Davies got back. From that moment, you could just see the players lifting themselves as if to say, “listen, it’s taken us such a long time to get here. We could be out.” We started really slowly in that game. But I’m sure as a squad, as a team, and even Chris Coleman as a manager with his staff, they will take quite a lot from that experience.

The team spirit and belief seemed to just grow with every match, but especially after the England game (Wales lost 2-1) which for many teams, could have signalled the end of the adventure.

We had a good win in our first game, maybe a bit fortuitous against Slovakia, but then to take the lead against England…You think you’ve done it, there are 30 seconds left and all of a sudden something falls to Daniel Sturridge and he scores. I’ve never, ever played or watched or worked at a game that I’ve felt so low afterwards. I’m sure the players have never felt so low either, but you know what, an hour after the final whistle I was all right, I’d got it out of my system.

Before we went to France, our aim was getting out of the group, reaching the last 16 and with a bit of luck, the quarter final. I thought to myself that we could win the first game, but we would have to beat Russia to get out of the group. That was still the case after the England game.

It was all new to us because we hadn’t qualified since 1958, and even though we had lost our middle game of the three, we still knew that even if we had a draw against, probably, the poorest side in the group in Russia, an ageing squad, that we would have a very good chance of qualifying. Never in my life did I think we would win the group, but there you go. Life’s full of surprises I suppose.

It made the tournament so much fun to watch for fans across the home nations.

I think the Scottish fans, because they weren’t there, supported the Welsh from the start. We’ve got a good relationship with both the Republic of Ireland and Northern Ireland as well. We don’t have as good a relationship with the English, but I think they all acknowledge an honest, hardworking, determined bunch of players.

As fans, I think that’s all you can ask. As long as the lads are honest and they give everything when they put that red shirt on, you can’t ask for any more, you know. Players don’t go out there to make mistakes, but one thing a supporter can’t forgive is a lack of work rate and effort. 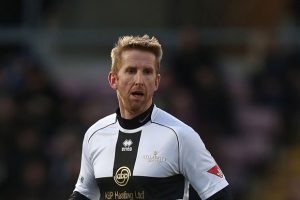 For all the praise of the squad as a group, which player do you feel is the team’s unsung hero?

That’s a hard one. Chris Gunter’s fellow pros know what he brings, and he’s got a great relationship with the fans. James Chester has come in and he has settled well. He was brilliant in qualification, he was brilliant in France. Ben Davies is solid. It is a real testament to Joe Allen that he won the Welsh FA’s Fan’s and Player’s Player of the year because there are quite a lot of candidates. Big Sam Vokes did ever so well when called on. But Joe brings so much, and he’s a great lad.

What are your thoughts on Chris Coleman’s performance as manager?

Chris took over in the worst circumstances ever really because he and Gary Speed were really good friends. They used to share rooms and were as thick as thieves. For the first five games Chris wanted to still do it Gary’s way. I think he lost all five and it took that defeat in Serbia where we lost 6-1 for him to react, and he was brave enough to do it. He thought long and hard, said a few home truths to the squad, he took the captaincy form Aaron Ramsey. He isn’t afraid to make big decisions.

I’ve always been a believer that, as a manager, you’ve got to do it your way. If you fail doing it the way you want it to be done, then you can have no complaints. You can hold your hands up and move on. But Chris has grown from strength to strength.

He’s got the upmost respect from all those players. I’ve played with Chris, I’ve played against him, and he’s a proper good lad. He’s down to earth, he’s never forgot his roots. Who knows if he will be Wales manager in two years’ time or even after this qualifying campaign, but at the minute, he is focused on the job in hand and the job in hand is, in our next game, going to Dublin and, hopefully, getting three points.

Chris Coleman is one of the best Welsh managers ever in terms of win percentage. As a Welsh fan, where do you think he ranks compared to the greats?

He’s got to be up there because of what he has achieved. I first got into the squad when Terry Yorath was manager. Terry was good. Terry took us so close in that game against Romania in the old Arms Park where Paul Bodin hit the bar. We were so close to reaching the World Cup, but it wasn’t to be. Mark Hughes, Sparky, nearly got us to a European Championship. Got us to the playoffs but we lost to Russia. Maybe he was a bit naive with his tactics, especially in the second leg. Mike England was a good manager as well, but none of them have done what Chris has done.

We’ve had good squads in the past and we’ve had good players. We’ve had the likes of Ian Rush, Mark Hughes, John Southall, John Charles, Ivor Allchurch, Gary Speed, Ryan Giggs and Craig Bellamy, but we are normally only strong in one department. The current squad, from number one to number eleven, is the best team and best squad we’ve had.

Do you think this squad has enough about it to continue to progress on the international stage and qualify for the World Cup?

Qualification is like anything, you need a bit of luck when the draw is made. I think we are in a tough group for the World Cup and we were never going to run away with it. Serbia are a good side, they’ve got some very talented players. Austria, even though they were poor in France, I think they were the second-best team to qualify, and it’s never easy against Martin O’Neill and his teams. We’ve not had the best of starts but we’ve not lost. We’ve drawn our last three which is a blow but we are not even halfway through the campaign.

I think they are a determined bunch and they’ve grown up together. So many of the current squad, apart from one or two elder statesmen like Ashley Williams and James Collins, have come through the U17s, U19s and U21s at the same time and now they make up the bulk of the full squad.

Whether we can sustain it… I hope we can. Chris has said he wants to take Wales to a World Cup. That’s his goal and with this team, this squad of players still in their mid-20s, I think we have a good chance.