Both Teams to Score Market 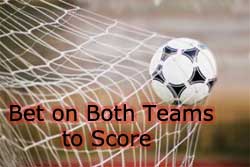 The both teams to score betting market has been one of the fastest growing within the industry over the past couple of years. As with anything, betting has its trends and fashions, with markets coming into fashion and then falling away.

One of the leaders to the concept was that of Betfred who introduced their Goals Galore market. This would entail the punter to select their matches from a large coupon –selected by Betfred- before each selection gets added to an accumulator type bet.

How does it work?

The concept is simple. You basically select a game where you think both teams will score at some point in the game. This can be at any time and it doesn’t matter how many each team scores, just as long as it’s one or more. The result of the match is actually totally irrelevant and as soon as both teams score a goal then the market will be paid out on. If one or both teams fail to score a goal then the bet becomes a losing one.

Bet on Both Teams to Score Strategy

The first thing you want to look for in markets like this is teams who are attack minded. Remember you need a team that is good going forward, but also capable to concede the odd goal. This is why it’s not always going to be best to bet on the bigger teams such as possibly a Manchester United or Barcelona as, whilst they are more than likely going to score against the majority of opposition, they are teams that aren’t going to concede many goals either. In fact, on the flip side you should be looking at teams that are lower in the league and even near the bottom who are likely going to struggle to keep clean sheets but are capable of nicking the odd goal.

A must for this sort of betting is to find out the team news prior to placing your bet. If the star striker has failed a late fitness test and has scored 15 out of the teams 20 goals that season, then the chances of them scoring are going to be massively depleted. On the other hand if the team’s best defender is back from injury then it’s going to be even more likely that they won’t concede a goal. Taking into account which players are playing for both teams can be one of the most important pieces of information you take for this market.

Recent form is another attribute you want to play close attention to; but as you would for say picking the winner of the game. We need to focus more on the form of their scoring and conceding habits. And this is for both teams remember. Look for weak defences and strong offences. Generally it’s hard to find teams that are good at both – and if we do, then it’s probably best just to stay clear. But most teams are better at one than the other. Take a look at the last 5 games for both teams and see if there were goals involved. You can extend this somewhat to see the form of both their home and away records before then applying this to the upcoming fixture. Some teams will likely be better at home or away, so taking this into consideration is an important feature.

Have been betting on these btts and so far haven’t been lucky its 1 beating after the other any tips i usually play the lower english leagues.