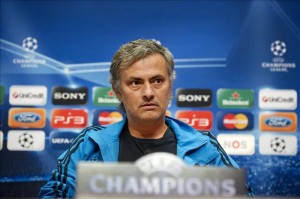 Real Madrid are currently seven points clear of second-place FC Barcelona in the La Liga table, with a game in hand, meaning that they have complete control over their destiny at the moment.

To say that Los Blancos have been on scintillating form this season might even be an understatement.

In 21 games, Madrid have bagged a whopping 71 goals, while conceding just 19. Truly remarkable.

Now then, let’s take a look at Real Madrid’s top goal-scorers of the season.

Iker Casillas has put together yet another good season in goal for Real Madrid. The Spain international has kept eight clean sheets in 21 La Liga fixtures, saving 54 efforts in the process.

Cristiano Ronaldo has been on cracking form for Los Blancos  in 2011-12, netting 24 goals and six assists in 21 matches.

If Madrid can win La Liga, and perhaps the UEFA Champions League, Ronaldo will be the clear-cut favorite to win the FIFA Ballon d’Or next season.

In addition, Gonzalo Higuaín is Madrid’s second leading goal-scorer in La Liga, having tallied 14 goals and one assist in 20 games.

Former Lyon hitman Karim Benzema has bagged 10 goals and five assists in 19 matches for Jose Mourinho’s side. Not bad for your third leading goal-scorer.

It’s tough to score goals without playmakers, and Real Madrid have plenty of those as well.

Germany international Mesut Özil has tallied one goal and 11 assists in 20 La Liga fixtures this season.

Özil is second only to teammate Angel Di Maria (13 assists) in La Liga in assists.

Perhaps the poor form of FC Barcelona is the number one reason Real Madrid are set to take down the La Liga title this season.

The Catalans slump has seen them drop seven points behind their bitter rivals, while Madrid still have a game in hand.

With only one meeting between the two sides left in La Liga, Barcelona are surely on life support at the moment.

Madrid can go 10 points clear of Barcelona if they win today’s home match versus Levante.

Los Blancos come into this fixture having won their last five home matches.

In contrast, Levante have lost five consecutive away matches.

In other words, I fancy Los Blancos.

Look for Cristiano Ronaldo to score and score often. A hat-trick is never out of the question when the Portuguese is on form.

I fully expect Madrid to boss the game and win convincingly, 4-0 Los Blancos.