Will New State-Based Regulations Have a Positive Effect On MLS?

When the United States Supreme Court overturned the PASA 1992 law that banned sports betting, Major League Soccer (MLS) publicly supported the move. The league acknowledged that regulatory bodies need to work diligently with professional sports leagues in order to protect the integrity of sports and stated that they looked forward to the process.

Major League Soccer is not as popular in the United States as the NFL, NBA, MLB or NHL hockey. When you look at any stats concerning MLS, you will find that the numbers are dwarfed by the NFL.

As far as fans go, it is more on par with the Canadian Football League. Still, MLS is quite successful in some cities.

Atlanta has averaged 48,000 spectators at their home games while Kansas City has sold out their 20,000 plus seats for over 100 games. Nonetheless, Stanford economist Roger Noll predicts that the league will fold within 10 years. He claims that MLS is too reliant on expansion fees to keep afloat. 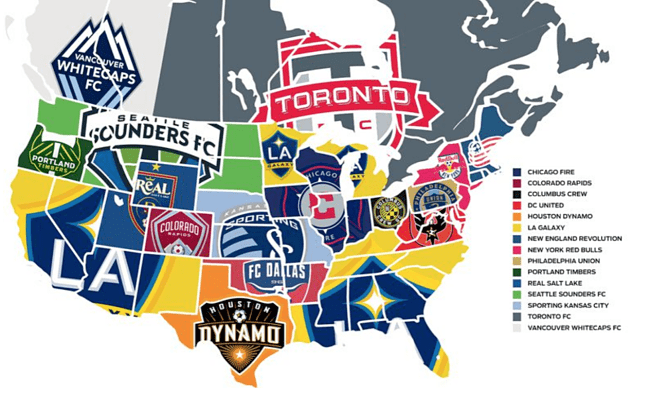 MLS fans across the USA

Betting Has Helped Boost Other Sports

So, would it help Major League Soccer if state regulations allowed people to bet on MLS games? It’s really hard to say but sports betting has definitely had a positive impact on other sports. Sports gambling has contributed to the NFL becoming a multi-billion-dollar industry. According to a Nielsen Sports study, it is estimated that sports bettors made up 25% of the NFL’s television audience in 2015.

Jimmy Vaccaro has been bookmaker based in Las Vegas for 40 years so he knows first-hand what sports are popular with sports bettors. He says that MLS betting is “a gnat” when compared to the number of bets placed on the other major North American sports. He doesn’t offer any explanation other than the sport simply isn’t that popular in the States.

Of course, things are entirely different in other places like Europe where soccer is the dominant sport and there is a massive sports betting market. Stadiums, as well as player jerseys, are rife with gambling advertising but it just would be the same in North America. Again, the sport is just not popular and needs to grow.

As Major League Soccer Commissioner, Don Garber does what he can to make professional soccer popular in North America. That’s a big part of his job. He’s seen plenty of new state-of-the-art soccer-specific facilities get built and he feels that they help to attract spectators. When asked about his thoughts on legalized sports betting on professional sports, Garber responded by saying that he was aware that it had been going on anyway so it might as well be managed and organized.

He then tossed out a newbuzz word: Integrity Fee. He vaguely stated that such a fee could be used to cover some of the costs to ensure that everything is proper. He then said that some of that new-found cash could be used to “enhance fan development”. He knows that the league needs to grow its fan base, increase its television audience, and engage their supporters.

While he isn’t certain, Garber believes that it’s possible that legalized sports gambling and the integrity fees that would likely come with it could help to build a fan base. Garber’s optimism aside, one can’t disregard what Jimmy Viccaro said about soccer being a virtual non-factor in the grand scheme of sports betting.

The Major League Soccer season runs from the beginning of March up until the end of October. Then there are the playoffs which culminate in the MLS Cup in early December. If you were to walk into a popular sports bar in early March or April, you’re exponentially more likely to see people watching NHL hockey assuming anyone is watching anything at all. Major League Soccer then needs to contend with the NHL Playoffs in May and June as well as Major League Baseball which goes head-to-head with MLS right up until the World Series.

The end of the MLS season and their playoffs goes up against the NFL and that’s a losing proposition. In short, the MLS schedule is a victim of bad timing. Don Garber has bandied the idea of a winter schedule about but that comes with its own set of problems such as the weather. It’s an uphill battle for Major League Soccer.

What Effect Will Legalized Gambling Have On MLS?

It is a pretty safe bet to say that new state-based regulations will have a positive effect on MLS. With that said, it won’t be much of a positive effect. Don Garber and Major League Soccer can’t expect people to suddenly start watching soccer just because their state has made sports betting legal. He certainly can’t expect soccer to legitimately compete with the other major professional sports.

The league got a pretty good boost when soccer superstar David Beckham played in it. Beckham single-handedly got people talking about MLS and more importantly watching MLS. Well, at least the games that Beckham was playing in. Star power has had a big effect on the success of sports in certain markets. Just think about the effect that Wayne Gretzky had on hockey’s popularity in California and the rest of the United States when he was traded to Los Angeles.

People will still gamble on sports whether it is legal or not and it is probably true that legalized sports betting in the United States will attract new sports bettors. However, if they weren’t betting on Major League Soccer and watching those games on television before the PASPA ban was lifted, then it is highly unlikely that we will see a massive influx of sports betting on MLS games.