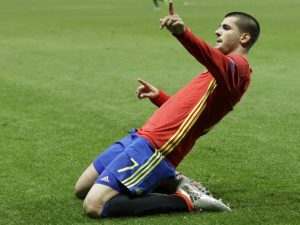 Juventus and Spain striker Alvaro Morata has been in fantastic form for club and country this year.

His first goal was an exquisite header, while his second goal of the game was a tap-in from close range after outstanding build-up to tear the Turkey defence apart, and he’s looking like the perfect man to lead the line for the defending champions.

Morata not a conventional striker

Alvaro Morata hasn’t been too full of goals for Juventus in his two seasons in Turin, but performances are what has led to the plaudits coming his way – particular in the second-half of 2015/16. The 23-year-old is an outstanding footballer, comfortable with the ball at his feet, while boasting a skill set in-keeping with the norm in Spain. Morata isn’t a typical striker, he likes to make runs into the channels, and provides more style than substance.

However, the entire Spain squad is that of a stylish outfit focusing more on ball retention and free-flowing attacking football, rather than being defensively resilient and robust, so Morata is a perfect fit. He likes to commit defenders and play intricate football, and will only get better with each appearance for the Spain national team. La Roja won Euro 2012 without a recognised striker, but Morata looks the ideal pick to slot seamlessly into the squad.

Morata has been in fantastic form for Spain this year, scoring four goals in five internationals. His form for Juventus considerably improved in 2016, and it was a similar story for La Roja. After having scored just one goal in six appearances with Spain in 2014 and 2015, Alvaro Morata has proven his worth as a frontman, and is vast becoming one of the most important players in the team to score and create chances.

Spain’s playing style has notoriously been a hindrance for centre-forwards, as their penchant to keep the ball over creating half-chances sees the striker’s forward runs being ignored at times. However, Morata plays in a similar mode to that of Spain’s philosophy, and has shouldered the scoring burden to make it this far. Morata is in the best form in 2016, and will be looking to continue such form in Spain’s next tournament clash. Alvaro Morata is 11/2 to be first goalscorer against Croatia on Tuesday, June 21. Can he continue his fine run of form in the Spain squad during the group stages?