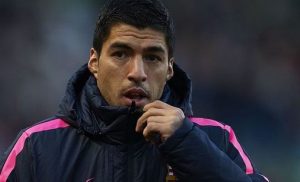 LuisSuarez deserved to be included in the three-man list by UEFA / Image via express.co.uk

European football governing body has today revealed a shortlist of the final three candidates who will be competing for the coveted Best Player in Europe Award and it is fair to say that UEFA’s decision raised quite a few eyebrows.

Real Madrid duo Gareth Bale and Cristiano Ronaldo are in the running for the award together with Atletico Madrid star Antoine Griezmann with UEFA opting to leave out several players that are believed to have deserved their place among the final three.

Cristiano Ronaldo helped Los Blancos to their 11th Champions League title earlier in the season, before playing a key role in his nation’s historic quest to their first major international trophy at the 2016 European Championship finals in France.

His teammate Gareth Bale also won a Champions League medal in May, while his inspiring performances for Wales at the Euro 2016 were clearly enough of a reason for UEFA to include him in the three-man shortlist.

As for the Atletico Madrid forward Antoine Griezmann, the French striker was on the losing end on both Champions League and Euro 2016 finals this year. Despite the disappointments, Griezmann was crowned top scorer at the European Championship having bagged six goals and at the same time scooping the Player of the Tournament award.

The UEFA criteria takes into account all competitions played on European soil, but their final choice was clearly made with EURO 2016 performances as the decisive factor.

Needless to say that plenty of football fans have been left disappointed by UEFA’s decision, most notably the supporters of the Spanish La Liga champions Barcelona.

Lionel Messi, who won the award last year, failed to make the final cut this summer having finished fifth in the voting, one place behind his teammate Luis Suarez who came in fourth.

The Uruguay striker was thus once again left out for a major personal award, after he was also overlooked by FIFA for 2016 Ballon d’Or award despite his strong domestic exploits for Barcelona.

The coveted prise was in last three years given to players who finished their respective seasons with Champions League trophy in their hands and if the same pattern is to be followed, UEFA are likely to award Cristiano Ronaldo with this year’s Best Player in Europe award.

However, was Luis Suarez once again done wrong?

Everyone’s favourite enemy, Luis Suarez is still struggling to get out of the shadow of biting incidents which are likely to haunt him for the rest of his career.

With his 40 goals in La Liga, Suarez has once again been the best player domestically speaking, topping the charts in the Spanish top tier and it feels unfair to rule out a player just because he is not European and consequently cannot appear at the European Championship to enhance his tally.

To put numbers into a different perspective, Luis Suarez scored the total of 60 goals last season, which is exactly the number of goals Griezmann (37) and Bale (23) bagged combined.

Talking about assists, the Uruguay international has been equally impressive. Managing 23 assists last season for Barcelona, Suarez had a bigger tallythan  that Griezmann (10) and Bale (11) managed together.

Luis Suarez is looking at the odds of 5/2 to repeat the fantastic exploits and be crowned La Liga top scorer in 2016/17 season.

Not to mistake me for a Barcelona fan after this article, I am merely stating some clear facts to support the claim that Luis Suarez should have been included in the three-man list.

Best Player in Europe award would and probably will be a nice piece of silverware for Cristiano Ronaldo to start the new season with and few could argue that Portuguese did not deserve to claim this accolade.

His 35 La Liga goals were followed by 16 more in the Champions League and 3 at the Euro 2016. Ronaldo has been a consistent performer throughout the season in every single competition and, what is more, he performed brilliantly in big games stepping up to the plate when it was most needed.

With all of the fact pointing out to Ronaldo as the most likely winner, UEFA could have done themselves a favour in nominating Luis Suarez and thus making a small tribute to a player who had a fascinating season behind him at Barcelona.