Could Liverpool miss out on a Champions League place next season? 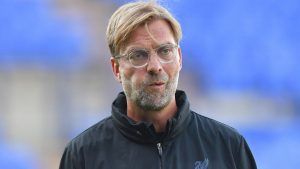 Liverpool boss Jurgen Klopp needs to strengthen his squad ahead of the new campaign.

Bookmakers have predicted Liverpool will be one of the Premier League’s big-six finishing outside of the top-four next season, with many believing the Reds’ lack of depth will see them struggle on all fronts.

Jurgen Klopp’s men have strengthened their attack but didn’t sign the 20-goal-a-season centre-forward they needed. They so far haven’t signed the midfielder they needed, nor have they bolstered the defence.

So will the Reds be the ones to miss out on Europe?

Weakness at the back still not resolved

Liverpool’s defence was identified as a key problem that Klopp needed to fix this summer, but all the Merseysiders have done is signed a left-back from the Championship in Andrew Robertson. Alberto Moreno lost his place to James Milner in the Liverpool defence last season but they’ve failed to sign a ready-made replacement who can cope with Champions League football and a grueling Premier League campaign. One area not adequately strengthened.

Liverpool needed a centre-back and were targeting Southampton’s Virgil van Dijk this summer, before leaked intel about the impending deal showed the Reds to be in breach of regulations. The deal looks dead in the water, meaning they could be left with Dejan Lovren, Joel Matip and Ragnar Klavan. Considering the Reds had the second-worst defensive record in the top-six, Klopp’s failure to bolster the backline could be costly.

Defending champions Chelsea signed a new second-choice goalkeeper in Willy Caballero, a centre-back in Antonio Rüdiger, a midfielder in Tiemoué Bakayoko and a striker in Alvaro Morata.

Manchester City have signed a goalkeeper in Ederson, a left-back in Benjamin Mendy, right-backs in Kyle Walker and Danilo, while signing an attacking-midfielder in Bernardo Silva.

Arsenal have signed a left-back in Sead Kolasinac and striker in Alexandre Lacazette. Manchester United have signed a centre-back in Victor Lindelof, a striker in Romelu Lukaku and are close to signing midfielder Nemanja Matic.

Even Everton have spent over £80m signing a goalkeeper in Jordan Pickford, a defender in Michael Keane and Cuco Martina, a midfielder in Davy Klaassen, and a number of forwards in Henry Onyekuru, Wayne Rooney and Sandro Ramirez.

Liverpool have brought in two names but have left a lot of gaps still needing to be fille,d evident from their failed pursuits for van Dijk and RB Leipzig midfielder Naby Keita. Liverpool are 5/6 to finish outside of the top-four next season.

Will they be the side to miss out on Europe?