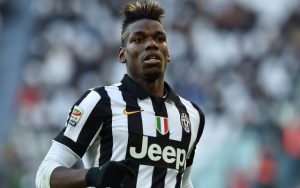 Paul Pogba’s agent has revealed the midfielder’s holding initial talks with Real Madrid ahead of a world record transfer this summer.

Juventus midfielder Paul Pogba is reportedly close to signing for Real Madrid this summer, according to the player’s agent Mino Raiola.

But given the competition for places in the Real side, as well as a settled midfield that helped win the Champions League in May, where will Pogba fit in?

Pogba could be seduced by idol Zidane

The French international is currently representing his country in this summer’s European Championships, but his agent has been speaking on his behalf. Raiola recently revealed how Pogba has begun the initial phase of what promises to be a drawn out saga. Talking about how his client wants to become a Ballon d’Or winner while being an admirer of country Zinedine Zidane – Real Madrid manager.

Real Madrid aren’t the only club having held talks with Juventus over Pogba, with Manchester United and Manchester City believed to be the two other clubs asking about his availability. But while Real are the frontrunners for his signature, their midfield is overstocked in players Pogba would be competing with, while potentially disrupting the balance Real had under Zidane in 2015/16.

Real Madrid president Florentino Perez has already seen his lucrative signing of James Rodriguez (€80M from AS Monaco in 2014) backfire with the Colombian subsidiary for large part of last season, but is looking to bring in Pogba without much thought to where he’ll fit in. James and Isco are two players currently on the fringes, and the Frenchman’s arrival would place doubt on Casemiro’s chances of keeping his place in the midfield alongside Toni Kroos and Luka Modric.

Real Madrid have played with a 4-3-3 and 4-1-2-2-1 style under Zidane, with deep-lying midfielder Casemiro brought in to marshal the backline and nullify the opposition. Pogba is very much an attacking player who scores and creates chances in the final third, but won’t provide anything in the way of protection in the middle of the park. The 23-year-old would command a starting place in the side, and it will give Zidane real problems on how to best balance out the eleven that steps out onto the pitch.

Having shown himself to be a pragmatic coach, Zidane isn’t likely to be overly thrilled with the new that Real are close to signing Pogba as he’ll be thinking where to include him in the settled squad. Paul Pogba is 5/6 to join Real Madrid this summer, but could his arrival upset the midfield balance?