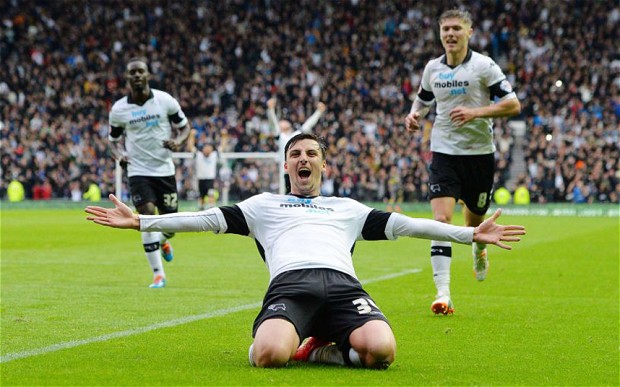 Football League Championship side Derby County have completed the signing of midfielder George Thorne from West Browich Albion for an undisclosed fee, per the club’s official website, dcfc.co.uk.

Thorne, 21, has signed a four-year deal at the  iPro Stadium and is absolutely delighted to become a permanent member of manager Steve McClaren’s squad.

“It’s been dragging on a little bit but we’ve got there in the end.

“I was relieved when a fee was agreed last night.

“It’s great to get everything done because, naturally, you have moments when you think it might not happen.

“Credit to the owners, Sam Rush and Derby County for sticking in there and getting a deal agreed.”

McClaren added: “We’re really pleased that George Thorne has joined us on a permanent basis.

“I am sure the fans will be delighted to welcome him back and we’re equally pleased that he sees Derby County as the right place for him at this point of his career.

“He was one of the first players I spoke about with our Head of Football Operations Chris Evans when he arrived in November, and we were well aware of his qualities when he joined us on loan in January.

“After being patient in waiting for his chance in the side, he showed what he could do on the pitch. His level of performance was excellent.

“It’s taken a lot of hard work for us to get to this stage but I think it says a lot about where we are at as a club that we’ve been able to bring someone like George in permanently.

“Credit should go to our President & Chief Executive Sam Rush for the time and effort he has put in to get this transfer completed.”

Thorne, a former England youth international at the Under-16, Under-17, Under-18 and Under-19 level, joined Derby on loan in January and went on to score two goals in 12 league appearances for the Rams.

Pochettino not planning to overhaul squad

New Tottenham Hotspur boss Mauricio Pochettino is not planning on bringing in many reinforcements during the summer transfer window.

The former Southampton manager has insisted his current squad at White Hart Lane is ‘good and big,’ which may help explain why the North Londoners are the only English Premier League side which have failed to sign new talent this month.

When asked about potential arrivals, Pochettino said: “Not many. We have a very good and big squad. Last summer the club made a big effort during the window and I believe in these players. We are always looking to improve but we don’t expect big change.

“It’s a different club to Southampton. Tottenham is a bigger club and we need to win, but not only win, we need to create a good philosophy. Our philosophy is exciting football, pressing attacking football.

“This is our target for the moment. During the season the targets will come.”

Based on their lack of summer signings, Spurs seem to be a club on the decline; whereas Alan Pardew’s Newcastle United, who have already completed the captures of Daryl Janmaat, Remy Cabella and Siem de Jong, are surely on the rise.