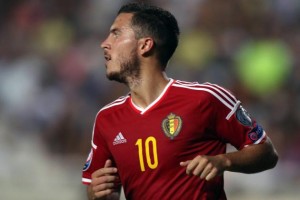 Belgium’s Eden Hazard was a standout performer in the Rode Duivels’ 4-0 win over Hungary to help book the side’s place in the Euro 2016 quarter-finals.

Belgium forward Eden Hazard was outstanding as the Rode Duivels enjoyed a 4-0 win against Hungary in the last-16 of the European Championships on Sunday.

The Chelsea man scored and made an assist at the Stadium Municipal, and was running Hungary ragged throughout.

He was the best player on the park, and finally delivered a performance expected of him as Belgium look ahead to their quarter-final clash to come.

Hazard the driving force in each Belgium attack

The 25-year-old had the second-most touches (71) in the Belgium side in the comfortable win over Hungary, and looked in the mood to beat his man at every opportunity (11 dribbles). Belgium’s opponents were playing such an open attacking style, while retaining an open structure even without the ball, the Rode Duivels took full advantage. Taking shots (3) and creating chances (4) at will, Hazard was outstanding, particularly in the second-half, and has now made Belgium even more feared going into the latter stages of the tournament.

Belgium manager Marc Wilmots hasn’t quite settled on a starting eleven, but the likes of Kevin De Bruyne (Manchester City) and Hazard’s roles in the side have been nailed on now. The Chelsea man operates on the left, and is given a license to cut inside and get forward to make scoring and chance-creating opportunities for himself, while Kevin De Bruyne threads through balls for the players running from deep overloading the opposition. Hazard found more joy running with the ball than passing it at times in the final third, and capped off the game with a fantastic solo goal late on.

Eden Hazard grew in confidence as the game went on and started to take advantage of the space to exploit. The Chelsea forward was picking up the ball in the middle of the park, spinning in one movement, and charging at the Hungary backline. The Hungarians’ midfield were bypassed with one simple pass and it left Hazard to run at their defence without any pressure. His decision-making wasn’t perfect, but he contributed to half of Belgium’s goals to see the game off. He got on the end of his own misplaced pass to whip a ball into the box for Michy Batshuayi to score from close range, before cutting inside from the left and hitting a low shot into the bottom corner.

Hazard was brought off not too long after his goal to get the standing ovation he deserved from the supporters, and Wilmots will be delighted that one of his key players is in great shape for the latter stages of the Euros. Belgium are 3/4 to win against Wales in Friday’s quarter-final clash. It will no doubt be billed as Gareth Bale vs Eden Hazard, so could the Belgium maestro be the difference?