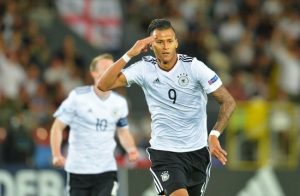 It’s been a remarkably exciting semi-final match at the Under-21 European Championship between England and Germany. Tides of dominance on either side, fantastic goalkeeping from the Germany shot stopper Pollersbeck and a string of (bad) luck was well enough to suggest we saw a cracker of a clash between two historic rivals.

Here is our in-depth match report:

England Under-21 selection has displayed great courage in their first UEFA U21 European Championship appearance since 2009 and earned their place in the high-profile semi-finals thanks to two wins and a draw from three Group A fixtures.

Despite being one of the most consistent performers in the tournament thus far, Germany have moved through to the semis as the best-placed runners-up in the groups after missing out on top spot in Group C to Italy.

Nathan Redmond has been kept on the bench from the start of the match, whereas another injury concern Nathaniel Chalobah has been fielded since kick-off. Germany, on the other hand, included former Arsenal man Serge Gnabry despite some worries.

Aidy Boothroyd’s men have started the match on the front foot and headed into the game ever so brightly. The Young Lions failed to make use of their dominance and composure however and allowed a quality Germany side to be the ones to break the deadlock five minutes after the half-hour mark.

Die Mannschaft have constantly tempted England with run-ins on the right-hand side, causing plenty of problems for the English left flank. Gray and Chillwell struggled against the pace of Philipp, Meyer and Toljan and it was the later who got an assist when he set up a cross for Selke’s opener.

Germany scored a deserved goal after playing through the England defence and midfield, but the Young Lions made a swift reply and instantly got back to terms with a goal from Demarai Gray, who latched on a deflection with a calm head and slotted the ball into the back of the net.

In the end, what we saw was an eventful 45 minutes and a half worthy of a semi-final encounter.

England manager decided to head into the second half with a slight change in formation. Boothroyd decided to slightly pull Baker back to his own half and slot him into the midfield row. The Vitesse midfielder added power to the midfield role to close the gaps and prevent Germany from breaking the lines as easily as it was the case in the first half.

England boss’ decision paid dividends when England managed to come back from behind to grab a lead through Tammy Abraham. It was Serge Gnabry who gave away possession inside his own half, allowing Hughes to collect the ball and firing a low pass into the middle where Abraham used his quick turn of the feet to tap it in.

Germans refused to back down, as always, and started putting plenty of pressure on England backline after going one down. The Young Lions lost their teeth after scoring their second goal allowing Germany to make use of their repeated near-post runs. And after 70 minutes of play Die Mannschaft did manage to do it through Felix Platte who planted a towering header in front of Holgate leaving Pickford helpless.

The same player thought he has put Germany upfront again with ten minutes on the clock with another one of his powerful headers, but the linesman got his goal cancelled for an offside position.

In the end, England go to extra time as a happier team after displaying a worrying slump in form during the closing stages of the regular 90 minutes.

Never a fan of extra time as I always get a feeling they would deride all of the achieved during full 90 minutes. Two chances on either side and a fourth substitution for both teams as a piece of innovation for this tournament was all that we saw from 30 minutes of action before we headed into the penalty shootout.

Always a thing of luck and fortune, penalties resulted in a miss from Gerhardt on the German side, while Germany goalkeeper Pollerbeck rose to the occasion to deny Redmond at a crucial moment and send his team through to the final after seeing Abraham miss his shot earlier on in the shootout.