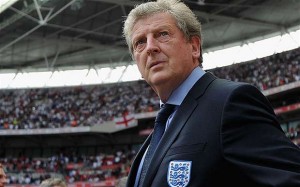 England boss Roy Hodgson has been adventurous with his squad selection.

England manager Roy Hodgson has finally named his 23-man squad for this summer’s European Championships, and has raised eyebrows with a highly-attacking selection that could see the Three Lions light up the competition next month.

It’s a team packed full of attacking talent, and Hodgson has made his intentions clear for all to see. In what might be his last tournament as a manager, the veteran head coach is seemingly adopting a “score one more than you” policy, rather than fretting over his side’s defensive woes. England haven’t kept a clean sheet in their last four international friendlies, but have also showcased real attacking verve to rip teams apart.

England’s strengths going forward is exactly what has influenced Hodgson to choose creative midfielders such as Ross Barkley (Everton), Jack Wilshere (Arsenal) and Adam Lallana (Liverpool). The aforementioned trio could be fighting for one place in the starting lineup, but their selection will give England dangerous attacking options from the bench. Naming five strikers is very bold too, especially considering one of them has endured ongoing problems with injury, and Hodgson will be licking his lips with such depth going forward.

England are being talked up as potential contenders to go all the way in the European Championships, and having so many attacking alternatives on the substitutes’ bench means goals should ensue regardless. Roy Hodgson will have a selection headache when looking at his team, and will enjoy finally having more top-class talent fighting for a spot.

Hodgson really believes England can win the competition.
Ordinary strikers, pedestrian midfield and defenders who will leak goals.
Recipe for failure.
Success is getting out the group. Not going to happen.
Next manager is Koeman.