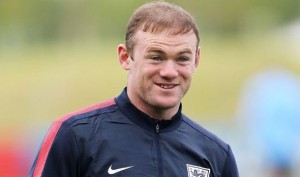 England striker Wayne Rooney has been criticised for his World Cup displays, but he never asked to be put up on a pedestal

Many people, both journalists and the man on the street have tried to understand where it all went wrong for England in Brazil.

However, it seems it is hard for the England fans to accept the simple truth. The players are just not good enough.

English people tend to have this habit of building people up, just so they can be knocked down.

The media play a major role in this nationwide craze. Every newspaper is looking to dig dirt on actors or pop stars. It is exactly the same with the country’s football team.

Take Wayne Rooney for example. The Manchester United star has been built up since he first arrived on the football scene with that goal for Everton against Arsenal at just 16. The moment he showed promise he was all of a sudden the saviour of English football.

The striker has taken a lot of stick from the English media for his performance in the World Cup. England have scored two goals, Rooney has created one and scored one. If he was any other player fans would be saying he was having a decent tournament.

However, because he was supposed to be the best thing since sliced bread he is pilloried for his performances. Rooney never asked to be put on a pedestal. He is a hard-working player, who is skilful, but he has never claimed to be a football genius or god.

Rooney tries his heart out for both club and country, so his effort cannot really be questioned. However, the simple fact is he is not a Luis Suarez or Lionel Messi.

Captain Steven Gerrard is another player that has received criticism. However, the Liverpool captain was a once great player for his club, but at international level he has never really produced his best form.

At 34-years-old and in a defensive midfield position he no longer seems the player that carried Liverpool for so long. He is a shadow of his former-self and talk of his retirement from international football may just be justified.

The current squad of England contains too many average players and some with potential. The defence is the perfect example. Left-back Leighton Baines seems to be the person from the England defence who is receiving the most criticism.

However, for Everton he is a different player. Baines is known for his rampaging runs forward, but too often he was shackled by the fact he did not have much defensive cover. In the last 20 minutes against Uruguay he all of a sudden came alive, especially combining with Adam Lallana.

Baines is a very decent Premier League full-back, but at international he is just not good enough defensively to face top opposition.

At right-back Glen Johnson’s biggest attribute is also going forward, as the equaliser against Uruguay showed. However, just like Baines he is a poor defender, despite being a decent Premier League player.

Centre-back Phil Jagielka plays alongside Baines at Everton, who had the third best defensive record in the top-flight last season last season. He is a solid centre-back, but at international level he is left wanting.

Jagielka’s centre-back partner Chelsea’s Gary Cahill seems to have received less stick than his three defensive teammates, but he is not exactly blameless. His club partnership with John Terry was one of the best in the Premier League last season.

However, his partnership with the usually reliable Jagielka just does not seem to work out. The current England defence is probably the weakest of recent years, despite Cahill and Jagielka not losing a game in the 11 games as a pair prior to the World Cup.

Liverpool midfielder Jordan Henderson had a superb season with the Reds and fully deserved his role in the starting line-up. However, his displays for England have been average, although he does have time on his side.

Last, but least, Danny Welbeck was employed on the left and right wing at times during the first two games. Welbeck is an honest player, who will work hard for the team and apart from the first half against Italy, looked like a forward playing out-of-position.

England does have a crop of young players, who do have a lot of potential, but the media need to be careful not to build them up too much before they have done anything. Ross Barkley, Alex Oxlade-Chamberlain, Raheem Sterling and Luke Shaw are just four of the new breed, who all looks comfortable in possession, an attribute not common in English players.

Barkley, Shaw and Sterling look set to start England’s last group game against Costa Rica on Tuesday, but Oxlade-Chamberlain is still out of action with a knee problem.

England does have some good young players coming through and hopefully they can deliver into top players in the future for club and country.

However, expectations have to be a reasonably low for the youngsters, because we have endured enough overhyping of English players to last a lifetime.