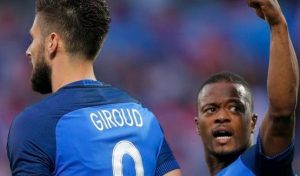 Didier Dechamps’ men have recorded their fourth consecutive victory with a 3-0 win over Scotland on Saturday night in a game which was the perfect introduction to the 2016 European Championship finals that are just days away.

France turned on style to cruise over Scotland in their final warm-up game in Metz and Les Bleus head into the continental championship in high spirits.

Here are the 5 things we learned from tonight’s match:

Arsenal striker Olivier Giroud scored a brace for France having opened the scorings with a near-post back-heel flick after eight minutes, while he added another when he followed up Dimitri Payet’s shot after 35 minutes in the game.

His Arsenal teammate Laurent Koscielny struck home four minutes later to put France in complete control in the closing stages of the first half as he headed past Scotland goalkeeper David Marshal from close range.

France ended the Saturday’s match with their heads high and hearts filled with confidence which will have done wonders for team spirits ahead of the final showpiece.

Les Bleus are a star-studded team, a talent-packed side bursting with quality with their home ground advantage only adding to team’s confidence.

Deschamp’s men are firm favourites to win the EURO and rightly so as the current generation of French footballers has perhaps been the best over the last decade or so.

Gordon Strachan’s men had little to fight for as they will be watching the Euro 2016 from the comfort of their homes. Scotland struggled to cope with the pace and power of the French side as they failed to test Hugo Lloris on a single occasion.

Their loss in Metz was the second consecutive following the 1-0 defeat at Italy and their fourth in last ten games.

Scotland will be looking to draw positives from the 3-0 loss to France as they hope to begin the new cycle and get in a good place before the start of 2018 FIFA World Cup in Russia.

As for Saturday’s game, there will be little to talk about following a lethargic performance against the in-form rivals whose motivation itself was difficult to contain let least all of the individual quality that was also on hosts’ side.

Arsenal man did well to silence the critics by scoring twice in French victory over Scotland rounding off his impressive performance in wonderful fashion.

Giroud was on the scoresheet in Monday’s 3-2 win over Cameroon, but he still received jeers and boos by the Nantes crowd. However, his impressive display against Scotland will have been enough to silence the boo-boys as Giroud international form continued.

Arsenal striker has been underrated throughout the season, both with club and country and the forthcoming Euro 2016 will be just another chance for Giroud to confirm his value.

Gunners’ man is likely to get extra competition at Arsenal with Jamie Vardy all but signed for Arsenal nad there is no doubt that the two could go on to form a lethal partnership next season with Vardy’s speed and agility and Giroud aerial awareness and ability to hold on to ball.

Paul Pogba has went a great distance in a short period of time.

Discarded by Manchester United he was seduced by Juventus where young Frenchman became the key performer going on to win and defend Serie A titles, at the same time progressing from being just a talented teenager to becoming a world class midfielder.

French international is wanted by his former employers Manchester United who are kicking themselves for being too heard-headed over the talented midfielder. In addition, Barcelona are also lining up to have Pogba sign for them and it was reported that Juventus man bought a house in Barcelona which was later denied by the player himself.

Great future is ahead of Paul Pogba who could go on to become one of the best if not the best midfielder in world football.

Perhaps a step closer to doing so he could come at this summer’s Euro 2016.

Depth the key for France

Plenty of options in every line of the team allow French head coach to shuffle his deck with players of equal quality without losing the dynamics or team balance during that process.

France started with Giroud as lone striker with Payet and Coman on the sides meaning that one of the best striker in Europe last season Antoine Griezmann and one of the hottest prospect on the continent Anthony Martial started from the bench.

Both were introduced later on in the game when they added an extra edge to French team without ruining the team’s fluency.

Ina addition to talent, individual quality, team spirit and confidence, depth remains one of the biggest values of the French national team.