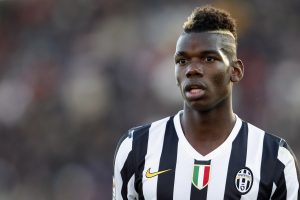 French international midfielder Paul Pogba, who plays his club football at Juventus, was outstanding in the first-half of France’s 0-0 draw against Switzerland.

France midfielder Paul Pogba was a standout performer in the first-half of Les Blues’ goalless draw against Switzerland on Sunday evening.

After a lot of criticism for being dropped due to poor performance, Pogba fought back, silencing his critics and showing his manager that he’s still an important player.

Pogba stepped up to the Payet role brilliantly

The Juventus box-to-box star was at the heart of everything good for France in the first 45 minutes of the game, hitting the woodwork and creating a number of chances, while showcasing high levels of industry to control the midfield. Pogba looked determined to impress, and had more shots on target (2) than any player on the pitch, while creating the second-most goalscoring opportunities (3).

The 23-year-old started alongside Moussa Sissoko of Newcastle United and Yohan Cabaye of Crystal Palace, and certainly showed his superior quality for his country. Rattling the bar with a powerful left-footed effort from distance, Pogba was the focal point with West Ham’s Dimitri Payet afforded a rest on the bench, and took the chance to impress with both hands.

Once dropped, now the first name on the teamsheet?

He will have felt hard done by to have not scored or created a goal given how many touches he made in the opposition half. France were hitting Switzerland on the break at times, utilising their pacey threat in the wide areas to get in behind La Nati’s backline, and Pogba was kickstarting these attacks from deep – completing eight of nine long passes.

The Juventus man was desperately trying to get France ahead in the game, and even took matters into his own hands when his teammates were fluffing their lines. Pogba underperformed in France’s first group game against Romania and it led to manager Didier Deschamps dropping him for their second group clash against Albania. But he responded well at the Grand Stade Lille Métropole, and should keep his place in the side for their last-16 outing to come.

Pogba’s dominance waned in the second-half as fatigue and managing of the game took the forefront, but Deschamps will be delighted that the player at the heart of his midfield is looking in fantastic shape. Pogba embraced the challenge of being the chief playmaker in Payet’s absence, and now the task for the manager is to have the two playing together for their next round meeting. Both occupy central areas when attacking, and they had little chemistry together in the first group game, so Deschamps will need to make tweaks to ensure the balance of the team is right.