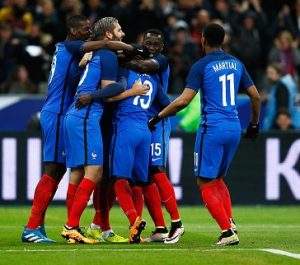 France have averaged more than two goals per game in this summer’s European Championships.

France welcome Germany to the Stade Vélodrome for Thursday night’s Euro 2016 semi-final clash, and are slim favourites to come out on top in what promises to be a tight affair.

Les Blues are top scorers in the Euros but they’re coming up against Die Mannschaft boasting the best defence. Something has to give on Thursday, but what will be the outcome?

Germany haven’t conceded a goal from open play in the European Championships this summer. They have kept clean sheets in their Group C wins over Northern Ireland and the Ukraine, while playing out a goalless stalemate against Poland.

In the last-16, Joachim Loew’s men comfortably dispatched of Slovakia without conceding, and against Italy in the quarter-finals only conceded a goal via a penalty. And with Germany conceding the second-fewest amount of shots per game (6.6) on average, France have their work cut out.

Only one side have stopped France scoring in the Euros

France have scored more goals in the European Championships than any other side, averaging 2.2 goals-per-game for their troubles, so they’re the worse opponents for Germany to face. Les Blues have taken the second-most amount of shots in the tournament (90), and have had the second most chances in the penalty area (50).

Didier Deschamps’ side have only been shutout once in their five games in the Euros, a 0-0 draw to Switzerland in Group A on Sunday, June 19. They’re coming off the back of a 5-2 win over Iceland in the quarter-finals, and will start with the three most potent attackers in the tournament for the Germany clash.

Dimitri Payet (3 goals, 2 assists), Antoine Griezmann (4 goals, 2 assists) and Olivier Giroud (3 goals, 2 assists) have contributed to 91% of France’s goals in the Euros so far, and will be hard for Germany to stop. They have operated in a number of different formations, but it’s likely they will be deployed in a 4-3-3 from the off, with more emphasis being placed on containing Germany with the bodies in midfield.

France are expert at getting the ball to their attackers in a speedy fashion, and if they can counter Germany well one of the trio should have no trouble finding the back of the net. Having the best defensive record and the world’s best goalkeeper will mean France have a real task breaching the World champions’ backline, but their attack has been rampant this tournament. France are 9/5 to win against Germany in Thursday’s Euro 2016 semi-final clash at the Stade Vélodrome, but can the host nation deliver against the tournament’s best defence?