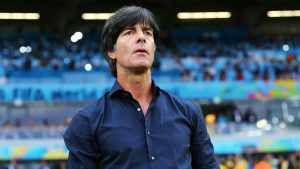 Germany played out a goalless draw in Thursday’s Euro 2016 Group C clash with Poland, which led to criticism from centre-back Jerome Boateng about the side’s lack of invention and movement in the final-third.

Manager Joachim Loew lined up without a recognised striker in their second group game, but given they have scored just one goal from open play in the Euros so far, is it time for change?

Germany have been keeping high levels of possession in games, but they have had little in the way of penetration. With diminutive playmaker Mario Gotze operating as a makeshift number nine, the Eagles don’t have a frontman making the runs in behind the defence. Instead, Gotze wants to collect the ball to feet and play pass-and-move football in triangles on the pitch. It leads Germany to play attractive football and wear their opposition out with all the chasing, but it’s not leading to clear-cut chances at goal.

Germany boast one of the strongest sides in the tournament, particularly having a strong midfield good enough to rivals any side in the European Championships. However, Loew may have neglected Germany’s need for goalscoring attackers with the lack of natural centre-forwards in the squad – Mario Gomez (Besiktas), Thomas Muller (Bayern Munich). Lukas Podolski (Galatasaray) and Andre Schurrle (Vfl Wolfsburg) are goalscoring wide-men, but not the type to play through the middle for Germany so what will Loew do?

Germany forward Thomas Muller might be the man to lead the line in their next tournament clash against Northern Ireland. He finds space brilliantly in the final third, but doesn’t have the physicality to wrestle off strong defenders. Nevertheless, his 32 goals in 73 games might convince the Germany manager that he’s more than worth keeping. He’s been used in a wide role for Germany so far in the Euros, but was reverted to a centre-forward in the second-half of the Eales’ draw with Poland.

Germany have such an embarrassment of creative riches with the likes of Toni Kroos and Mesut Ozil in the midfield to create chances all over the park, so how will Loew convert this into goals? Who will get the nod next week against a buoyant Northern Ireland outfit? Germany are 1/3 to win against Northern Ireland on Tuesday, June 21, but can manager Joachim Loew finally get some goals from the side?