How can Wales beat Belgium in Friday’s Euro 2016 clash? 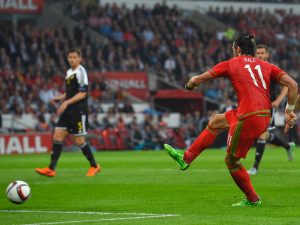 Wales lock horns with Belgium at the Grand Stade Lille Métropole in the quarter-finals of Euro2016 on Friday evening, in a game many feel could be closer than anticipated.

Wales undoubtedly have a weaker collective squad than the Rode Duivels, but they have a manager who has real tactical nous to try and target the weakness of Belgium to try and come out on top.

Width could be key for Wales

One area Belgium are notoriously uncomfortable in is the fullback area. Jan Vertonghen is injured so Marc Wilmots’ men will have a new face in the backline on the left-hand side. Eden Hazard offers little in the way of protection as the left-winger, and will leave a gaping hole for sides to exploit on the counter due to his penchant to cut inside.

On the right flank, Belgium’s Thomas Meunier is on a yellow card and won’t want to suspend himself by getting booked again. He won’t have any protection from his winger (unless Yannick Carrasco starts over Dries Mertens)) either, so width might be key for Wales. Using the extremities of the pitch will open up the Belgium defence, leaving gaps between the backline for Wales’ forwards to exploit.

If Wales are planting wide men in advanced areas to spring the trap, they could really hurt Belgium on the counter. Belgium’s deep-lying midfielders don’t sense danger on the turnover, and they can be caught flat-footed if Wales can move the ball quickly.

Outnumber Belgium’s midfielders in the middle of the park

Another notable weak point of Belgium’s is their two central midfielders Axel Witsel and Radja Nainggolan. The two players neglect their defensive duties to supplement the attack at times, so there’s a real chance for Wales to play some passing triangles around them. The likes of Joe Allen and Aaron Ramsey will be key to this, but manager Chris Coleman might also introduce Jonny Williams to the side later in the game to help the Dragons retain possession.

Belgium haven’t been controlling games by keeping the ball, and while Wales like to play on the counter, they can’t afford to be defending wave after wave of attacks by giving away possession cheaply. Belgium aren’t a side who will press high up the pitch, they do allow their opposition time on the ball, so if Wales can start to control the game in the middle of the park, they could create chances in open play. Wales are 19/4 to win against Belgium in Friday’s quarter-final clash. Can Chris Coleman’s side deliver?