An entire month’s worth of football is behind us with curtain down on the glorious World Cup 2018 we’ve witnessed in Russia.

France were crowned world champions after a commanding and highly-organised performance which saw Didier Deschamps’ men earn critique initially for their seemingly defense-oriented approach and applauded ultimately for what turned out to be a systematically controlled display with every aspect of their game well thought through and analysed.

The quadrennial competition was also a perfect opportunity for leading world stars to further strengthen their stock and make a strong case for themselves in the race for the highest and most prestigious individual achievement – Ballon d’Or.

Some did better than the others and the fact Luka Modric and Kylian Mbappe emerged as the World Cup Golden Ball and Best Young Player winners, respectively, will have made a couple of changes in the overall Ballon d’Or layout.

The names of Cristiano Ronaldo and Leo Messi are naturally in the discussion despite their disappointing World Cup performances. The world’s living footballing legends have won five trophies apiece since 2008, earning respect for what they’d done for Real Madrid and Barcelona, respectively, during the last decade.

Cristiano Ronaldo finished the last season with his third consecutive Champions League title – to which he contributed with an impressive tally of 15 goals – whereas Leo Messi bagged La Liga honours and an astounding score of 34 league goals.

The events that transpired during the World Cup have shed a different light in Ballon d’Or race.

With Ronaldo’s Portugal and Messi’s Argentina crashing out of the tournament in Russia at the Last-16 stage, the world’s most dominant duopoly were denied an opportunity to score in the knockout stages of the World Cup.

On the other side we witnessed Mbappe and Modric inspiring their respective sides to victories which puts them in second and fourth place in terms on chances predicted by some of world’s leading bookmakers.

The French teenager and the Croatian maestro both leapfrogged Leo Messi in the pecking order with 5/1 given to Mbappe and a 7/1 price slapped on Luka Modric. Another French player, Antoine Griezmann, managed to sneak in between them with 6/1 betting odds, keeping him in third. 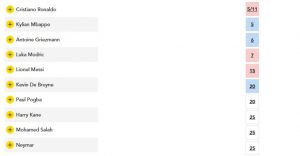 Cristiano Ronaldo remains the overwhelming favourite with not more than 5/11 betting odds, whereas Messi’s 15/1 offers little promise and encouragement that Argentine wizard could pip the Portuguese to the coveted title.

The award will be rewarded in January 2019 and there’s still plenty of time for tides to change but in terms of final decision making the number of trophies and impact a player had on their teams will be a contributing factor.

The position on the ladder is easily changed and players from outside the top five still have plenty of time to make a strong start to the new campaign and move upwards in the rankings.

Kevin De Bruyne, Paul Pogba, Harry Kane, Mohamed Salah and Neymar are completing the top ten favourites although it would be a first-class surprise if any of these players stunned the new Juventus star Cristiano Ronaldo to what can easily become his sixth Ballon d’Or.

Who do you think wins it? Can anyone ruin Ronaldo-led race?