Is Lucas Vazquez coming to the Premier League? 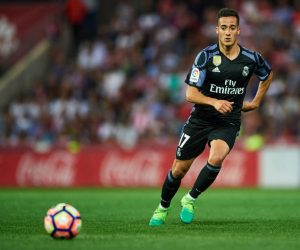 Real Madrid winger Lucas Vazquez has recently been linked to Arsenal and Liverpool, with the 26-year-old rumoured to be seeking more first-team opportunities after a season as a fringe player.

Vazquez has a respectable goal output from the limited starts made in 2016/17 and finished the season as a La Liga and Champions League winner. So is he on his way to the Premier League?

Arsenal are pursuing other targets

Arsenal have been linked to the Real Madrid man, but the Gunners have their eye on two other players who would operate in his preferred position. AS Monaco winger Thomas Lemar is believed to be the Gunners’ first-choice this summer after bolstering the strike-force with Alexandre Lacazette. Leicester City’s Riyad Mahrez is the second choice if Lemar doesn’t sign.

Vazquez could well be next on the list but he will provide a completely different threat to the aforementioned duo. Lemar and Mahrez are more dangerous in the final third and perhaps do a lot less defensively than Vazquez. They also like to cut inside onto their natural left foot to create chances and goalscoring opportunities. The Real Madrid man is more direct and will hug the touchline.

Liverpool’s interest stems from a number of factors. He would be fantastic cover in the squad, given their bench last season often provided little in the way of quality. With the Champions League to compete in next season, Jurgen Klopp is keen for more players with such European pedigree and experience of high-profile matches.

Vazquez fits the bill perfectly, playing for Real Madrid in the Champions League with some of the best footballers in the world. The 26-year-old is coming off the back of a good season too, scoring and creating nine goals (two goals, seven assists) in 12 La Liga starts, so he will still pose a threat in the attacking third.

Real Madrid have been trimming the fat

Real Madrid have been somewhat busy in the transfer market this summer but haven’t been signing many new faces. Los Blancos have parted company with many of their fringe players – Alvaro Morata to Chelsea, Danilo to Manchester City, James Rodriguez to Bayern Munich (loan), Pepe to Besiktas and Fabio Coentrao to Sporting Lisbon.

They are clearly looking to cut superfluous players from the squad but will be mindful not to lose too many people and lose their great depth in all areas. Vazquez may be afforded a move away this summer as a result, but which club he joins is another question.