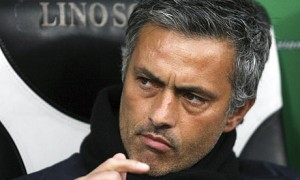 Chelsea sit top of the Premier League table, a point clear of Arsenal. The title race is wide open with Manchester City and Liverpool still in the title race alongside the Blues and the Gunners.

The result was disappointing for the Blues. Jose Mourinho’s team opened the scoring on nine minutes through Spanish striker Fernando Torres and dominated the first half.

The Spaniard may have scored, but the club-record signing has been poor throughout his Chelsea career, but all three Chelsea strikers have been poor this season for the Blues.

Chelsea boss Jose Mourinho was recently overheard stating “I have a team but no striker”. That is quite a damning statement coming from a top Premier League boss. Mourinho is a master of mind games, but surely even the former-Real Madrid boss did not mean this as motivation for his strikers?

Between them Chelsea’s strikers Fernando Torres, Demba Ba and Samuel Eto’o have scored just 11 Premier League goals this season. By any teams standards that is a poor record, but for such a club big club it is unacceptable.

Chelsea’s own attacking midfielder Eden Hazard has 12 goals in the top-flight this season. The likes of Swansea’s Wilfried Bony and Southampton’s Jay Rodriguez both have ten for the season, so that illustrates just how poor Chelsea’s strikers have been.

Top teams are usually spearheaded by top strikers. Chelsea are supposed to be a top team, but without a world-class striker then the Blues will not become a top team. Liverpool have former-Blues star Daniel Sturridge and Luis Suarez, while Manchester City have Alvaro Negredo and Sergio Aguero in their attacks.

Arsenal have French striker Olivier Giroud, who has found the net 12 times this season in the top-flight. The former-Montpellier striker does receive criticism at times, but he has outscored Chelsea’s attacking trio.

One of the first signings of Jose Mourinho’s first spell was Didier Drogba. He went on to become a focal point of the team, a leader and a Chelsea icon. That is the quality of striker that Chelsea now needs to lead their attack.

I do not think that many Chelsea fans would rate any of the current Blues strikers as anywhere near as good as the Ivory Coast international. None of the trio is young, so they will not improve notably either.

This summer will be crucial for Chelsea. The Blues have been linked with a number of high-profile strikers since Mourinho moved back to Stamford Bridge. The likes of Radamel Falcao, Edinson Cavani and Diego Costa have all been reported Chelsea transfer targets.

Yet Chelsea started the season with Torres, Ba and Eto’o as their attacking options. It would be a major surprise if Mourinho did not attempt to sign a high-profile striker in the summer. Eto’o’s contract expires in the summer and it is unclear if he will be offered a fresh deal.

Ba is a perennial substitute at Chelsea and has started just two Premier League games this season and came off the substitutes bench nine times, which has resulted in just one top-flight goal this season.

Fernando Torres arrived at Stamford Bridge from Liverpool for a British record transfer fee of £50million. At Liverpool he was regarded as a big danger to opposition, despite his goal against Galatasaray he has looked like more of a threat to himself than the opposition in his Chelsea career.

Jose Mourinho had been criticised for loaning out highly-rated young striker Romelu Lukaku to Everton in the summer transfer window. The Belgium youngster has scored nine goals in the Premier League in 20 appearances for the Toffees.

Lukaku is still very raw though and prior to being injured was struggling to find the back of the net for the Merseysider’s. Although Lukaku would arguably get better service at Chelsea, the young strikers poor run of form at Goodison will be concerning for everybody connected with the Blues.

Lukaku does not yet look ready to spearhead the Blues attack and may well find himself heading out of Stamford Bridge again this summer, if as expected Chelsea sign a high-profile striker, despite outscoring the Chelsea strikers in the top-flight this season.

If any Chelsea fans believe that Romelu Lukaku is the answer to their striking problems, I suggest that the youngster is not yet the finished article and that is what a club of Chelsea’s status needs for next season.

Although it could be argued that Jose Mourinho’s Chelsea mark two are still a work in progress, the Blues look strong in every other area of the pitch apart from attack. However considering the Blues lack a world-class striker they are still topping the Premier League table and still in the Champions League.

Despite Chelsea’s strikers struggling to score goals this season the Blues are still joint-favourites to win the title this season at odds of 7/5. Mourinho’s men have a short trip to relegation threatened rivals Fulham on Saturday, I for one will not be betting on one of the Chelsea strikers opening the scoring against the Cottagers that is for sure.

He is the boss and of course The Special One , full of conflict lol