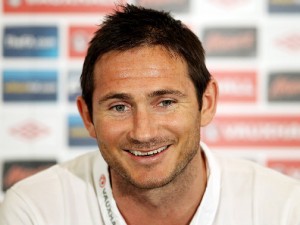 Lampard has one year left on his current contract, and the Blues would surely love to get his £130,000-a-week deal off their books as they continue to pursue Luka Modric and Joao Moutinho.

The 34-year-old England international may be in the twilight of his career, but he still has the ability and quality to boss the game, especially in the United States.

Let’s be perfectly honest, the talent level in Major League Soccer is nowhere near that of the English Premier League.

With that said, Lampard tallied 19 goals and 10 assists in 57 appearances for club and country last season.

Will the former West Ham United standout be reunited with former Three Lions team-mate David Beckham? We shall see.

According to the Mirror, Premier League champions Manchester City have placed an £80m price tag on Spain international David Silva to ward off Real Madrid from luring the playmaker to the Estadio Santiago Bernabéu.

The European giants have a habit of luring highly-rated Manchester players to the Spanish capital, with former Manchester United talisman Cristiano Ronaldo having made the move to Madrid for a world record transfer fee of £80m in the summer of 2009.

In addition, he’s put together a fantastic Euro 2012 campaign, establishing himself as a regular in Spain’s starting XI.

Don’t bet on Silva wearing an all-white kit next season. In other words, City should retain his services.

Holland international Ibrahim Afellay, who did not get regular playing time at Barcelona under Pep Guardiola, will hold talks with new boss Tito Vilanova to discuss his future with the Catalans.

Liverpool, Lille OSC and Tottenham Hotspur are all interested in the Dutch midfielder, talkSPORT reports.

Afellay appeared in just five competitive matches for FC Barcelona in 2011-12. He also featured in five international games for the Oranje, tallying one goal and one assist in UEFA Euro 2012 qualifying.

The Merseysiders and Spurs are also targeting TSG 1899 Hoffenheim midfielder Gylfi Sigurdsson, who tallied seven goals and three assists in 18 leagues games while on loan at Swansea City last season.

The Iceland international does not seem to be in Markus Babbel’s future plans. A move away from Hoffenheim seems imminent.