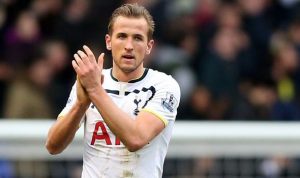 With the Spurs centre-forward picking up the Premier League Golden Boot for the second consecutive season, Merson may well have a point.

“I honestly thought Man Utd would have gone for Harry Kane. I thought they would have gone £90m or £100m for him. I don’t think Man Utd can afford to have a Pogba situation next season where they pay big money for someone and it’s going to take them a season to get into it,” said Merson to Sky Sports.

“This is a hard league. If Man Utd had gone for Harry Kane they’d buy someone who is going to hit the ground running, is proven to get you at least 25 goals a season. It’s another gamble if they do this and they get a Pogba situation where it takes time to settle.

“They are going to be behind the eight-ball again, fighting for fourth place. This is Man Utd, one of the biggest clubs in the world. They need to be going for Premier League titles.”

Kane is a goal machine

The 23-year-old has been ruthless in front of goal since his breakthrough season in the Premier League. Kane has already scored 99 goals in 165 games for Tottenham Hotspur, netting 78 in 113 league outings. The England international, who has eight goals in 19 appearances for his country, scored 29 goals in 30 Premier League games last season, ending the 2016/17 campaign with seven goals in his final two matches.

Kane has surpassed 20 Premier League goals in each of the last three seasons for Tottenham and is showing no signs of stopping. He’s proven himself as one of the best strikers in the division and one of the best in Europe. As a young, English talent he certainly wouldn’t come cheap, but money is no object for Manchester United. The Red Devils paid a world record fee to sign Paul Pogba from Juventus last summer and wouldn’t hesitate to break the record again for a proven goalscorer.

Harry Kane possess a lot of qualities that would see him success at Old Trafford. The centre-back is a physical threat and proficient in the air, but also runs the channels and can be a good out ball for turning defence into attack. He’s expert at link-up play and holding the ball up, potentially useful to bring others into the attack, and has scored past all but one of the sides he’s faced in the Premier League. Harry Kane is 12/1 to join Manchester United this summer.