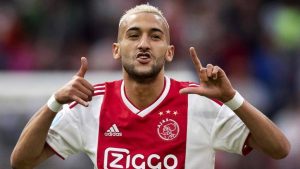 After an amazing season, Hakim Ziyech could be going from Ajax to Premier League. The season is nearing its climax, but it is still far from over, as Ajax remain the only club alongside Barcelona who could win the triple crown – league, cup and a European trophy. With Ajax in the cup final, atop of the Eredivisie and in Champions League semifnals, that is still possible, but clubs are already taking their picks from this interesting side.

Hakim Ziyech is one of them and the Moroccan’s exploits have led to interest from a number of top Premier League clubs, according to the Mirror. With impressive performances against Bayern, Juventus and Real Madrid, Ziyech will have a lot of potential suitors and Arsenal, Liverpool and both Manchester clubs have been rumoured to make a move in the near future for the Moroccan.

The Mirror claim he could be available at the bargain price of £25m.