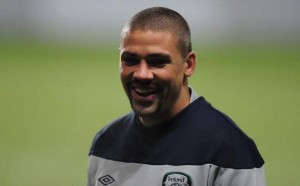 The standout result came at the Britannia Stadium, where Stoke’s unbeaten home run this season came to an end as Chelsea defeated the Potters 4-0.

The game was an absolute nightmare for Potters star Jonathan Walters. The visitors took the lead on the stroke of half-time.

Cesar Azpilicueta’s cross was headed into his own net by the Republic of Ireland international.

Chelsea doubled their lead in the 62nd minute. Incredibly Walters flicked past keeper Asmir Begovic for his second own goal of the game from Juan Mata’s corner kick. Three minutes later Chelsea were three goals up.

Juan Mata went down in the penalty area after both Robert Huth and Ryan Shawcross challenged the Spaniard for the ball. The referee rather harshly pointed to the spot and veteran Frank Lampard made no mistake from the resulting spot kick.

The goal of the game came seventeen minutes from time. Belgium international Eden Hazard picked up the ball from Juan Mata and produced a stunning finish from 25 yards. There was still time for Jon Walters to complete his nightmare day by hitting the Chelsea bar late-on from the penalty spot.

The victory moved Chelsea above Tottenham in the Premier League to third in the table. Stoke remain 10th in the top flight table.

The early kick-off saw a bore draw at Loftus Road, as QPR drew 0-0 with high-flying Tottenham. The home side defended superbly and kept in-form Spurs at bay. Julio Cesar produced superb saves from Jermain Defoe and Emmanuel Adebayor, among others to keep the scores level.

The draw took QPR temporarily off the bottom of the table, while Spurs remained fourth until Chelsea’s victory at Stoke.

Reading jumped above QPR in the Premier League table after a dramatic 3-2 victory against West Brom at the Madejski Stadium. The visitors took the lead on 19 minutes, Romelu Lukaku scoring from close-range after good play from James Morrison.

Lukaku doubled his sides lead in the 69th minute, racing onto another James Morrison pass and beating Adam Federici at his near post. At that point it looked like the Baggies would be heading home with all three points.

However, Reading had other ideas. The Royals got a goal back in the 82nd minute. Gareth McCleary crossed for winger Jimmy Kebe to head home at the far post. The home side equalised in the 88th minute.

Kebe was fouled in the penalty box by Baggies defender Jonas Olsson and striker Adam Le Fondre kept his nerve to equalise from the spot. The unbelievable come back was complete in the 90th minute.

Defender Alex Pearce headed a free-kick down into the box and Pavel Pogrebnyak flicked the ball past Ben Foster in the visitor’s goal. The turnaround means that Reading are now just three points away from safety in the Premier League table.

Everton and Swansea cancelled each other out at Goodison Park, as their clash finished 0-0. Everton’s best chance of the game fell to Victor Anichebe, whose effort was cleared off his own line by Swans defender Ashley Williams.

The Swans best effort came from Michu, whose cleverly lobbed effort was tipped onto the bar by Everton keeper Tim Howard. Everton had others chances, but profligacy and superb defending meant it finished goalless.

Norwich and Newcastle also drew a blank at Carrow Road. The best chance of the game came from a long-range effort from Russell Martin midway through the second half that hit the post. Both teams ended losing runs with this draw, but Newcastle are still just two points clear of the relegation zone.

Southampton secured three precious points at fellow strugglers Aston Villa, winning 1-0. The only goal of the game came from a very dubious penalty kick. Jay Rodriguez went over in the box under a challenge from Villa defender Enda Stevens. Replays showed that there was no contact on the young striker from full-back.

Rickie Lambert scored from the penalty spot, to continue his perfect record from the spot, having scored 29 out of his 29 attempts. The strikers’ ninth goal of the season was enough to secure the three points.

The victory was enough to move the Saints above Villa in the Premier League and into 15th place in the top flight. Meanwhile the home side dropped into the danger zone.

Elsewhere, Fulham and Wigan drew 1-1 at Craven Cottage. The Cottagers took the lead in the 22th minute. Greek midfielder Giorgos Karagounis struck a fantastic effort from 25 yards out that hit the post and found its way past Ali Al-Habsi in the Latics goal.

The home side had chances to extend their lead, but couldn’t find a second goal and were made to pay for the missed opportunities in the 71st minute. Argentinian striker Franco Di Santo made up for first half missed chances by firing home a superb effort which arrowed into the top corner of the net.

The draw was probably a fair reflection on the game, but Fulham will be disappointed at failing to take maximum points on home turf. Meanwhile the Latics are only out of the relegation zone on goal difference.

Sunderland claimed a 3-0 victory over West Ham at the Stadium of Light. Swedish midfielder Sebastian Larsson put the home side into the lead on 12 minutes, smashing a superb effort past Jussi Jaaskelainen from 25 yards.

The Black Cats were two goals up just after the break. Winger Adam Johnson hooked home after youngster Daniel Potts failed to clear a James McClean cross, which was palm away by Jussi Jaaskelainen.

The home side made it three in the 74th minute. Stephane Sessegnon miss-kicked the ball and his effort fell to winger James McClean who fired in from a tight angle. The victory moved the Wearsiders to within a point of the Irons.

Can Reading now survival relegation from the Premier League this season?