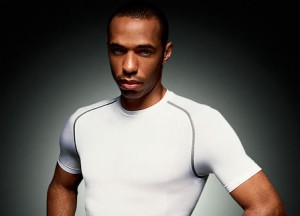 Arsenal are being linked with a move to bring Thierry Henry back to the club. The Frenchman has been training with the Gunners after the MLS season finished.

The former-Barcelona striker is a club legend in North London after an eight-year spell with the Gunners.

The striker seems to be enjoying his time in the USA but the question is could he still perform in the Premier League? Henry is in good physical shape but there will be questions about if he is still capable of playing in the English top flight.

When asked if Henry could re-join the club on-loan Arsenal boss Arsene Wenger replied: “At the moment, Thierry Henry just practices with us. I haven’t even investigated that. I cannot tell you even if there is a chance because I haven’t even made any approach, not to him nor his club.”

Arsenal are currently lacking strikers and have a major dependency on Dutchman star Robin Van Persie. Arsenal boss Arsene Wenger must be looking at his attacking options and thinking that he needs to strengthen in the transfer window.

A loan move for Thierry Henry must be seen as a logical possibility. He knows the club so well and is the Gunners highest ever goalscorer. Henry has visited Arsenal on numerous occasions since leaving the club and is regarded as one of Arsenal’s greatest players.

It would be interesting to see if Henry could still do a job in the Premier League. He was a fantastic player in his first spell at Arsenal and he would be an extra attacking option.

Henry is still a Arsenal hero and it seems that the fans are hoping that he does come back to the club. I think these fans are looking at the situation with rose tinted glasses. They are probably remembering the glory days of Henry’s career.

However at 34 years of age he is definitely not the same player he was in his pomp, you really can’t expect him to be. It’s only natural that the aging process will have an affect on Henry.

Thierry Henry moved to the USA because he felt that he was no longer good enough to play at the highest level of the game. Henry and the MLS was a perfect combination. The Frenchman is the sort of player that can raise the profile of the game in the USA and Henry could carry on playing at a decent competitive level.

Henry is the sort of star player that young American players can lookup to and learn from. Henry is also believed to really enjoy the New York lifestyle. Everybody wins from Henry being in the MLS.

I think if Thierry Henry is offered the chance to return to Arsenal on a short-time deal, I don’t think he could resist the temptation of having one last stint in the English top flight. When he left Barcelona for New York I’m sure he never thought he would ever play in the Premier League again.

I really think this is a win-win situation for Arsenal. Henry may be aging but I’m sure he is still capable of doing a job for the Gunners, even if it just coming off the substitutes bench. Thierry Henry returning to Arsenal seems like a realistic possibility.

as a regular watcher of the mls. the simple answer is hell no. he does not have the cutting edge and ruthlessness he used to have. it’s great to have old legends at their old clubs. but the gunners really need to look for the next henry rather than getting back their old champions.

Obviously at this moment Arsenal need a striker and also a player who can inspire d team as well.. Henry might be 34 and he might not be the same.. But he can bring up Arsenal game n bring back d confidence among the players.. I really wish Henry will return again and help arsenal..

he wants henry to be staff just like patrick veira and man.city

Thiery Henry is Arsenal legend,Me and other Arsenal fans want to see Henry with Robin van Persie in these remaining matches of the season.so Mr.Wenger all arsenal fans wants Henry back in Arsenal.

It’s my dream comes true if I see Thiery Henry with Robin van Persie on Emirates stadium.When i hear Mr.Wenger bring back Henry in Arsenal,that day is my life’s Happiest Day.

henry has got the experience and i blv he can guide da young players at arsenal,i think he has still got it. wenger knows we in desperate need of a striker the pressure is mounting on van persie! i say lets give him a chance(short term loan) to see if he has still got it (34?). lets not forget that he is da lead goal scorer for the Gunners!

it is pure nonsense for him to come back and play for gunners.

Thiery WAS a great player with arsenal. Arsenal will b better-of with him if ONLY he concentrates more of creating goal chances for others, than scoring them. I THINK HE IS A GOOD PLUS.