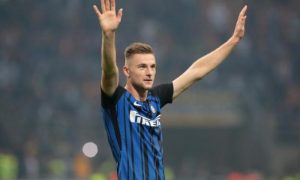 Inter Milan are preparing to drastically improve their team next summer. After going out of Champions League in the group stages, they will need to bring in some faces that will give them boost. But while new players will be expected to arrive, some of those who are already at the club will also need to stay.

That is why it is an important piece of news that Inter defender Milan Skriniar is expected to sign a new contract with the club. According to Corriere Dello Sport, Skriniar has already extended his contract through 2023 and they feel it is now less likely for him to depart in the summer.

However, these news still have not been confirmed by the club. Anyway, Corriere Dello Sport claim his new deal will double his wages to €3m per year, which will definitely make the player eager to stay amidst the interest of Manchester City.