Where will Alexandre Lacazette end up this summer? 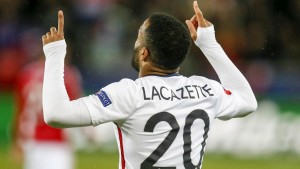 Olympique Lyonnais striker Alexandre Lacazette has seen his dream move to Atletico Madrid called off due to the Spanish club’s transfer ban.

And on top of that, club president Jean-Michel Aulas has been determined to hold onto the French centre-forward despite a number of clubs still interested in his signature.

So where will Lacazette end up at the end of the summer?

Arsenal have the #10 high on their transfer wishlist

The 26-year-old has been linked with Arsenal for some time but the asking price has long been an issue for the Gunners. However, AS Monaco’s Kylian Mbappe was reportedly the subject of a £90m bid from Arsenal this summer, meaning Lacazette should be affordable if the club deem him worth the money.

Atletico Madrid were ready to spend around £80m for the French international, who described the potential move as a dream. Lacazette has long spoken about his desire to play in the Champions League but did lead Lyon to the Europa League semi-finals last season.

Arsenal finished outside of the top-four of the Premier League last season and won’t be in the Champions League as a result. Liverpool, who have also been linked with Lacazette, will be in the prestigious competition in 2017/18, meaning they might have a greater chance than the Gunners of signing him.

Phenomenal goal-record will attract the attention of top European sides

And given Lacazette’s outstanding goal record for Lyon in recent seasons, Arsenal and Liverpool won’t be short of competition. The long-serving striker, who has two years remaining on his contract with OL, has made 275 appearances for the Ligue 1 giants, scoring 129 goals.

He’s netted over 20 league goals in each of the last three seasons but his international prospects have suffered as he’s not playing for a big European club. With 34 goals in all competitions, Lacazette is one of the most prolific strikers in the continent, potentially leading to increased interest in the coming weeks.

89 goals in his last 125 games in all competitions is consistency that could convince sides keen on a centre-forward that Lacazette is a proven talent and can shine in any division. To many clubs, there is doubt that the 26-year-old can make the step up if he does eventually leave Lyon. He’s had chances to leave for years but is still in France.

Alexandre Lacazette is 1/1 to join Arsenal this summer, but where will he end up ahead of the new season?