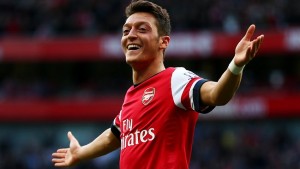 Arsenal playmaker Mesut Ozil has been linked with a move to German Bundesliga giants Bayern Munich this summer but is yet to make a decision on his future.

The 27-year-old has stalled contract talks with Arsenal, and given he’ll be playing with potential Bayern teammates in the World Cup-winning German national team this summer, Ozil might considering joining them on a permanent basis.

Mesut Ozil enjoyed the best season in an Arsenal shirt with 19 assists and six goals from 35 Premier League games. He created 146 chances, and was the driving force behind the Gunners finishing second in the league in 2015/16. Much-maligned in his earlier years at the club, Ozil has shown he can handle the physical rigours of Premier League football, and looks much more at home operating as the fulcrum.

But his outstanding season resulted in little other than the ‘Arsenal Player of the Season’ award and the ‘Premier League most assists’. Ozil failed to add any major silverware to his trophy cabinet, and after three years at the Emirates Stadium – winning just two FA Cup winners medals – the midfielder appears to be disillusioned with the Gunners. He’s yet to put pen to paper on a new deal, and is alleged to have interest from Bayern Munich among others.

Playing alongside winners in the German side could tempt Ozil

This summer, Mesut Ozil will be lining up for 2014 World Cup winners Germany, who are bidding to win Euro 2016 to be crowned as undisputed. Champions. In the national team, Ozil could be playing with six Bayern Munich players (including Mats Hummels who made the switch this summer), all of whom have tasted domestic success in recent years.

Question marks surrounding Mario Gotze in the Bayern side might also be a factor in Ozil’s decision this summer. The young midfielder has been linked with a move away from the Allianz-Arena, and further reports have suggested Bayern have left it in his hands to decide upon his future. Should Gotze leave, Ozil would be more confident of coming in to Bayern as a first choice for 2016/17.

At 27, Ozil perhaps has one more long-term deal to sign before he will be in his twilight years, and at Bayern he would always be guaranteed titles given their recent success. The lure of the perennial Bundesliga champions is obvious. In the time Arsenal have won two FA Cups, Bayern have won three league titles and two German Cups.

What will Mesut Ozil do this summer? Will he stay or go?

Arsenal shouldn’t force any player to stay if he is not interested in playing for Arsenal and committed to give hundred per cent. If he is not signing the new contract offered to him by Arsenal ,then he should be allowed to go for a minimum of 60 million pounds or to the highest bidder. We don’t want him to leave at all , but if that is his decision then nothing we can do than getting good money to strengthen further Arsenal team and squad.

I think ozil shouldn’t be allowed to leave bcos we need him to help us out in this very new season . We have money to buy any player we want , it is not until we sell before buying !!!
Arsenal is a big club which all d players doing business for us must respect and give their best as a professional.
We are looking forward to doing more business in the transfer market , and hope we do better this season in Jesus name, Amen.

I think is better to offload some players who never made to 1st line up over seasons and keep regulars at whatever cost as you strengthen with world class players. It is much easier to build on what exist than sell and buy, Arsenal should change stock market exchange approach.