Will Fulham’s Clint Dempsey move on this summer? 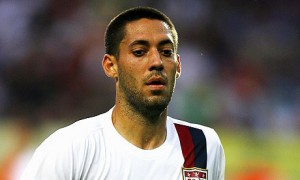 Fulham attacker Clint Dempsey has enjoyed a fantastic season and is now being linked with a move away from Craven Cottage.

The latest team to be linked with the USA international is Liverpool, after chairman Tom Werner admitted that any team would be lucky to have Dempsey.

One of the key aspects of Dempsey  moving this summer could be his contract situation. The 29 year-old has just over a year to run on his contract and would be free to leave Fulham next summer if he doesn’t sign a new one.

The prospect of Dempsey signing a new deal with Martin Jol’s men seems unlikely and the Cottagers are very unlikely to want to lose one of their big assets for nothing next summer. Although Jol himself has stated that the midfielder/striker is not for sale.

This season has seen a bumper return in goals for American international Dempsey. He has managed to find the net 22 times so far this season, as Dempsey has played a more advanced role in the team. The move to a more advanced position has certainly paid dividends.

Dempsey is now the most prolific American player to have played in the Premier League, having outscored former-Fulham star Brian McBride earlier this season. He is a hero amongst Fulham fans for his sheer hard work and determination.

I always believed that Clint Dempsey was very underrated. This seasons goal scoring exploits have brought him to the attention of every top club in the Premier League. Dempsey has already been linked with a move to Fulham’s London rivals Arsenal, and now he is being linked with a move to Liverpool.

His compatriot Liverpool chairman Tom Werner told Sky Sports: “ We never talk publicly about transfer targets, however, any team would be lucky to have Clint Dempsey playing on their squad,”

That sounds like a pretty clear indication that Clint Dempsey is a transfer target for the Reds this summer. They could also face competition for the American international from local rivals Everton, who have also been linked with a move for Dempsey.

I think Clint Dempsey would be a good signing for any Premier League team, even if he is approaching 30. Dempsey is the sort of player that always gives his all and never leaves anything out on the pitch. When he isn’t scoring gals he’s working hard trying to create them.

Dempsey has stated in the past that his ambition is to play for a club playing in the Champions League. That would give Arsenal the edge over Liverpool in the race to sign Dempsey if it became a straight choice.

Unfortunately for Fulham, I can’t see Dempsey staying. His stock has never been higher in the game and I’m sure he will see this as his perfect chance to get a move to a bigger club. If he still has the ambition of playing in the Champions League now is the right time for him to move on.

Loyalty is very rare in football and I don’t think Clint Dempsey owes Fulham anything. Fulham took the chance on bringing him from the MLS but Dempsey has repaid them three-fold since then with goals and hard work.

Will Clint Dempsey be at Fulham next season? I very much doubt it. It will be a shame for the Cottagers to lose one of their star players but they simply can’t afford to let him leave on a free transfer next summer.

I think it’s a case of Fulham trying to get as much as they can for Dempsey and moving on. For Clint Dempsey who knows where he will end up. I’m sure wherever he goes he will be a roaring success, just like he has been at Fulham.

Naturally, I’d love to see him play for United. But seeing him starting for the Gunners will suffice. So long as he doesn’t play for Liverpool. I think you and I can both agree on that, David.

Yeah Brad, I think we do agree on that one!

He should play for everton

I would like to see him at Everton but I think it’s very unlikely at the moment.