Will the NY Red Bulls win the New York derby on Sunday evening? 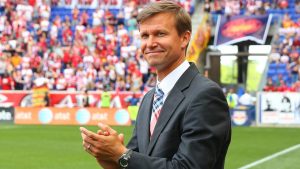 New York City FC welcome New York Red Bulls to the Yankee Stadium in the MLS on Sunday night, and are favourites to pick up all three points despite their inferior form ahead of the clash.

But with the Red Bulls in much better shape, particularly on the road of late, while boasting a one-sided head-to-head record, can they come out on top?

Patrick Vieira’s New York City side come into Sunday evening’s derby off the back of poor form which could see them coming unstuck in their own backyard. City are currently third in the Eastern Conference with 37 points from 22 games, having picked up just one win from their last four in the division.

New York City’s victory over Chicago Fire is their first in the league since June, and the 10 goals conceded in their previous four outings will be music to the ears of the Red Bulls. As for the visitors, Jesse Marsch’s side are enjoying a four-game winning streak and could leapfrog their rivals if they see past City.

The Red Bulls have picked up six wins in their last eight games in the Eastern Conference, boasting three consecutive wins on the road ahead of Sunday’s meeting. Not only are the visitors the form side, they have also dominated this fixture given their many, many years of establishment, compared to New York City being a side more recently formed in the MLS.

New York derbies in all competitions

New York Red Bulls have beaten their rivals at home and on the road without much trouble in recent seasons, and their recent form is considerably better than that of New York City’s. Victory could see them overtake their opponents in the table and narrow the gap to second-placed Chicago Fire. New York Red Bulls are 2/1 to win against New York City FC on Sunday evening.

Can the visitors come out on top?