Back France at 30/1 to Claim Three Points vs Denmark 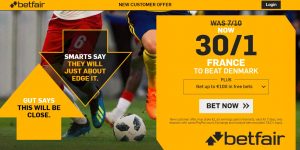 A lone goal from Kylian Mbappe made all the difference for France who became the third country to book a place in the knockouts of the World Cup after beating Peru.

Despite the vital victory, Didier Deschamps’ men put in another underwhelming performance which in no way captivates the true attacking essence of this talented squad.

Having sealed their place in the next stage of the competition, Les Bleus face a challenge in the final match. Denmark have been forced to settle for a point against the resilient Australians and the forthcoming clash will determine who is the second team to go forward.

It can possibly even decide who gets to head into the knockouts from the first place but it’s a scenario France will be eager to avoid. Les Bleus are identified as firm favourites to make it three out of three and you can back them to do so with a slightly symbolical betting odds of 30/1.

This new customer offer is available to all of those who register with Betfair through this link using the promo code ZFBDPZ. Place the maximum of €1 and you’ll be in for up to €100 in free bets.